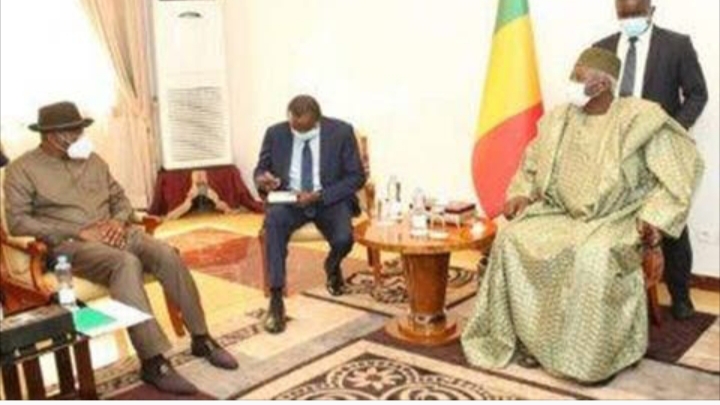 A retired colonel, Bah Ndaw who was designated Mali’s interim president after a successful coup which ousted a democratic President last month made his first public appearance on Thursday where he met with a regional mediator.

The 70-year-old Ndaw met former Nigerian President, Goodluck Jonathan in Bamako on a mission for the 15-nation bloc ECOWAS, on the eve of his swearing-in.

Goita himself will serve as vice president, under the announcement.

The interim president will rule for a maximum of 18 months before staging nationwide elections.

Meanwhile, the Economic Community of West African States slapped sanctions on Mali on August 20 to push for swift restoration of civilian government, including the appointment of civilians as interim president and prime minister.

The bloc may announce on Friday whether the plan meets criteria for easing sanctions, Jonathan said on Thursday.

An official close to the sanctions discussion, who declined to be named, said that “there are still consultations going on”.

Jonathan was due to meet other Malian officials on Thursday, besides Ndaw, including prominent figures whom the military detained after last month’s coup.

ECOWAS has demanded the release of all detainees. Keita was released, but former prime minister Boubou Cisse, among other officials, remains in detention.

Mali’s neighbours have taken a hard line with the junta, fearful that the fragile nation of some 19 million people could spiral into chaos.

Swathes of the vast country already lie outside of government control, due to a lethal jihadist insurgency that first emerged in 2012. It has also inflamed ethnic tensions.

Current restrictions include border closures and a ban on commercial trade and financial flows but not on basic necessities, drugs, equipment to fight coronavirus, fuel or electricity.