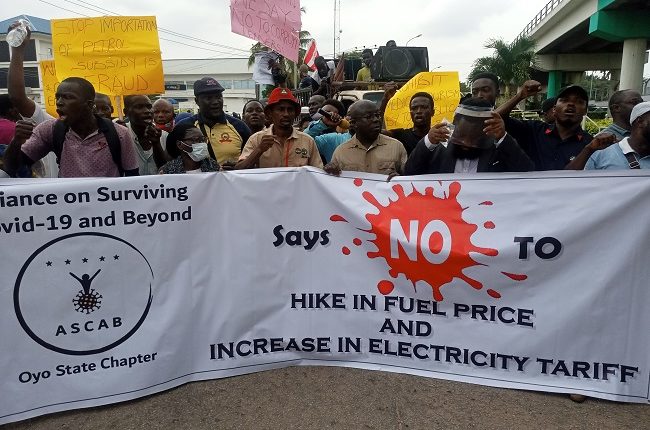 The decision of the national leadership of Nigerian Labour Congress (NLC) and Trade Union Congress (TUC) to suspend the planned commencement of strike has been described as betrayal of trust by workers under the platform of Joint Action Front (JAF), Alliance on Surviving COVID-19 and beyond (ASCAB).

The protesters while carrying placards decried that the decision reached in Abuja had put the labour movements in bad light in the eyes of Nigerians.

They particularly expressed displeasure at the failure of the NLC and TUC to report back to their members as it is customary before announcing a suspension of the strike.

The protesters maintained that they remained opposed to increasing in fuel price and electricity tariff and called for its reversal to status quo.

Speaking on the development, the Secretary of ASCAB, Professor Adenike Ogunshe lamented that the President Muhammadu Buhari administration rather than cushion the effects of COVID-19 on Nigerians inflicted more hardship with the increase in electricity tariff and fuel price.

She also accused Buhari of having earlier opposed fuel subsidy only to now justify its existence five years into his administration.

She charged Nigerians to revolt against the increases, noting that taking to docility will be unfortunate.

“In a country where people are dying of malaria because of lack of probably N500 to buy medication, this government is taking loans as if the more they borrow the longer they will live. They have so much borrowed that the next 70 generations can’t pay back.

“All over the world, governments are planning and doing the best to cushion the effects of COVID-19 on their citizens, but our cushioning effects in Nigeria is to increase our electricity tariff and fuel price.

“Mr President speaks from both sides of the mouth. When he was contesting, he told us that there was nothing like fuel subsidy, five years down his own reign, he is now removing subsidy so who is fooling who?

“NLC, TUC can decide to suspend the strike and it is unfortunate. They went to the table to negotiate with government and they could not come back to tell us that they have succeeded in telling the government to reverse what they have done then we can start afresh but came back to give us two weeks. It is our hands whether Nigeria will drown completely or will rise in its own best glory,” Ogunshe said.

Also speaking on auspices of ASCAB, a human rights lawyer, Femi Aborishade, blasted the NLC and TUC for reaching a compromise that was not in the interest of Nigerian masses.

Pointing to Federal High Court pronouncements of 2013 and 2016 as rendering arbitrary increases of prices of petroleum products and electricity tariff as illegal, null and void, Aborishade urged the Buhari government to be a respecter of the rule of law.

“I oppose the compromise entered into by the Nigeria Labour Congress (NLC) and Trade Union Congress (TUC) leaderships.

“I oppose the resolution of betrayal of the interest of the Nigerian masses entered into by the leadership of the NLC and TUC.

“We must be governed by the rule of law. The Federal High Court had made an order as far back as 2013 that the regulation of petroleum products by which oil dealers can increase the prices of petroleum products at their whims and caprices that that policy is unconstitutional, illegal, null and void.

“In 2016, a federal high court ordered that the 45 per cent increase in electricity tariff was illegal, unconstitutional, null and void and that all DISCOs should reverse back to the old price.

“The Federal Government has not brought to book the DISCOs, oil dealers yet they are repressing the Nigerian people.

“I oppose any increase in fuel price, electricity tariff. Our government should not lawless but should be law-abiding,” Aborishade said.

He also accused Buhari of not living to his campaign promise of reducing pump price of fuel to N45, noting that what is termed subsidy is over-invoicing and massive corruption in the oil and gas sector.

“In 2012, the President was protesting the increase in fuel price. He was talking as a former Minister of Petroleum and said that the price of fuel shouldn’t be more than N45 and that was why Nigerians voted for him. We don’t believe in subsidy; we believe that what we have is over-invoicing and massive corruption.

“After the 2012 struggle, they promised to fix our refineries and about N148 billion has been spent and till today, we are made to believe that we are not actually producing anything. There are 445,000 barrels of crude earmarked for local consumption so what they are expected to do is to take our crude oil out, get it refined and put it back to us. We don’t know how a litre of PMS is N162.

“The effect of this is an increase in food prices. A bag of rice is now N30,000 due to an increase in the cost of transportation. What this government is doing is to unleash poverty on the people,” Aremu said.

Another union leader, representing all nonacademic staff in the state, Mr Olukoya Adepeju said workers were displeased at the failure of the labour movement to report to their members the outcome of their meeting with government officials before announcing the suspension of the planned strike.

“We are not happy because the national body supposed to have consulted its members before deciding to suspend the strike. This puts the union in a bad light. People now see the union as a betrayer because we were still mobilizing for the industrial action up till 12 am.

“So, if there is need to stop this strike, there should be consultation where they give reasons for the suspension. We are not happy the way the strike was suspended,” Adepeju said.

Also addressing passersby, former chairman, Oyo TUC, Mr Andrew Emelieze said irrespective the agreement reached by the national leadership of NLC and TUC reached an agreement in Abuja, Nigerian people had a right to protest if they are displeased at happenings in their country.

“We are saying Nigerians will not take continuous increment in the pump price of petrol and electricity tariff. We say no to bad government,” Emelieze added.

A passerby who joined in the protest, Mrs Debola Adeyemi lamented that the high cost of food prices had made feeding her family difficult.

She decried that Nigerians were subjected to much suffering, asking the federal government to ameliorate the situation by implementing measures to bring down the cost of foodstuffs.