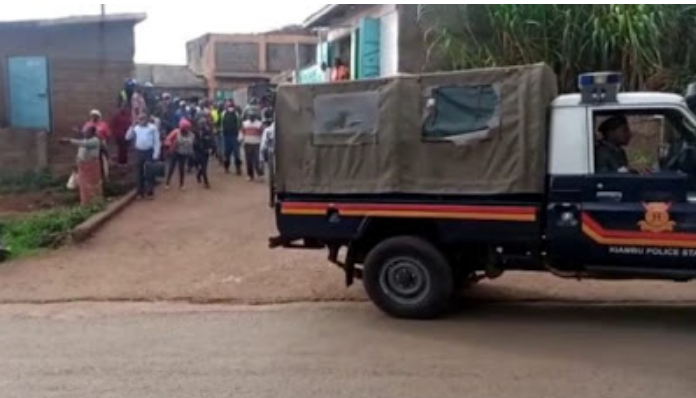 A middle-aged man from Kenyatta Road in Juja, Kiambu County, Kenya has been arrested for for bighting his neighbor’s son’s penis.

The suspect bit the 20-year-old man’s penis  and a finger of the victim’s mother following a disagreement between the suspect and the woman.

Joyce Muthoni was putting up a one-floor building in his compound to accommodate her two sons, a move which angered the suspect, Eric Nyagah, who vowed not to allow Muthoni construct the building, arguing it “lowered the status of the residential estate”.

Nyagah had allegedly brought down a wall of the building, which was under construction, forcing Muthoni to inquire why he had destroyed a part of her house.

Nyagah allegedly became violent and began assaulting Muthoni. Muthoni’s son, Charles Kinyua, who was watching the fight between his mother and the suspect from afar rushed to the scene to rescue his mother.

Nyagah is said to have overpowered the 20-year-old man, whom he wrestled to the ground and bit his manhood before turning on the man’s mother. Muthoni sustained injuries after Nyagah allegedly bit her finger.

Kinyua was taken to the Kenyatta National Hospital (KNH), where he underwent a corrective surgical operation.

Why we are fighting - Nnamdi Kanu speaks, calls for peace in South-East

Report: Buhari 'forced' Tanko Muhammad to step down As CJN