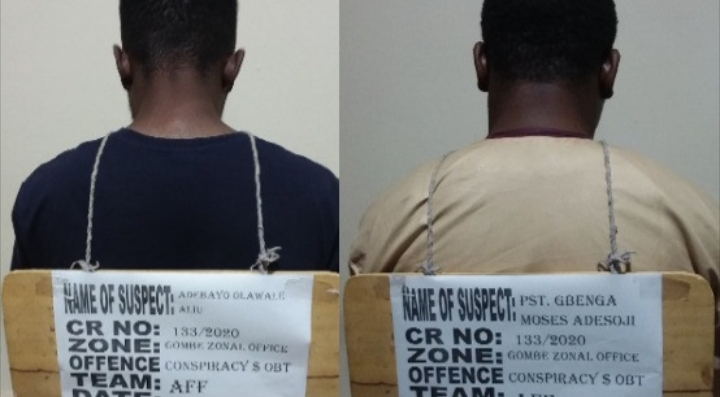 A suspected fraudster identified as Adebayo Olawale who resides in No. 25 Fashina Road, Ile-Ife and his pastor Gbenga Moses Adesoju of Christ Apostolic Church, Ile-Ife have been arrested by the Economic and Financial Crimes Commission, EFCC, Gombe Zonal office for allegedly defrauding one Umar Hayatu of Lafiya quarters, Dukku Local Government Area of Gombe State to the tune of N12.7m.

This was contained in a press statement released by the spokesperson of the airgraft agency, Wilson Uwujaren.

The EFCC spokesperson disclosed that the duo were apprehended at Ile Ife following a petition jointly written by the relatives of the victim (Umar Hayatu).

They alleged that the suspects conspired and defrauded the victim via social media platforms and phone calls under the pretense that he won a car, some expensive phones and an offer of employment into a juicy position.

”Adebayo, the prime suspect, contacted the victim severally using fake Facebook account names; Williams Angellina and Omolola Adebayo and deceived the victim into believing that his parents have a Company abroad and will make him (victim) the Nigerian Manager of the Company at Lagos.

The suspect further sent the victim various fake pictures of Houses and cars that would be given to him as fringe benefits as soon as the company commences operation.

He also promised him 30,000 US Dollars and expensive gifts such as iPhone and Jewelleries” the statement read in part

The anti-graft agency added that preliminary investigation revealed that the sum of N12, 798, 387.00, proceeds of the fraud was traced to the suspect’s account in a new generation bank.

Adesoju, his alleged accomplice, was also said to have received a BMW car, a plot of land and various sums of money from the proceeds of crime for his spiritual intervention.

The EFCC disclosed that both suspects had volunteered useful information and would be charged to court as soon as the investigation is concluded.