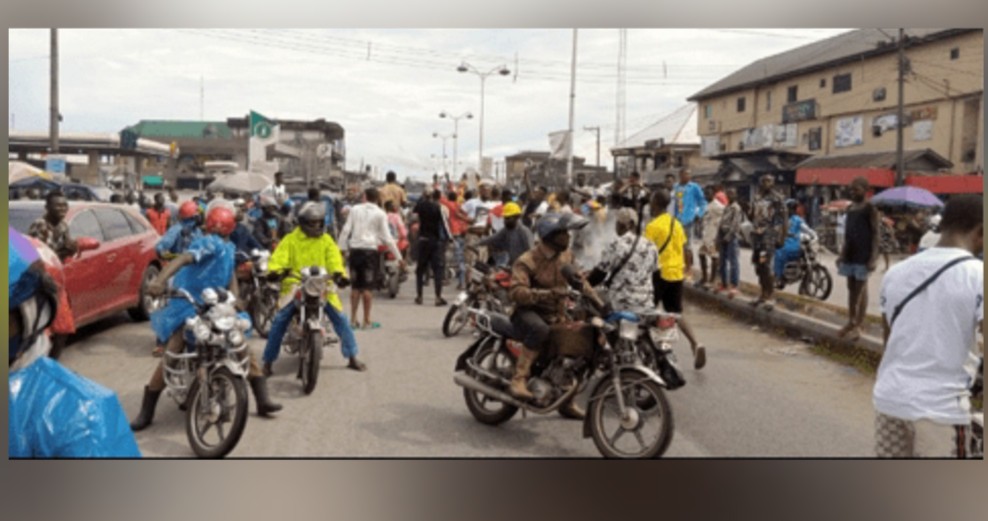 Tension on Thursday hit the Otovwodo axis of Ughelli, headquarters of Ughelli North local government area of Delta State as a policeman was killed following the protest that rocked the town in the wake of the ENDSARS Protest.

The incident also led to the destruction of several cars as commuters along the East-West road axis of Otovwodo junction scampered for safety following the series of gunshots that ensued while the melee lasted.

The protesters had begun their protest from the Otovwodo junction axis of Ughelli and marched through Isoko road to the market road while boycotting the Ughelli ‘A’ division police station to Ekuigbo and back to Otovwodo junction.

Protesting in a convoy of tens of exotic cars in company of some female protesters, one of the leaders of the protesters who identified himself as Ochuko, said they had decided to boycott the police station in a bid to forestall a clash with policemen at the station.

According to report, some of the protesters whom were apparently agitated, had met a team of policemen at Otovwodo junction were the protest walk was supposed to end and a clash ensued leading to a sporadic gunfire while the police returning same.

Eye witness account said that upon sighting the policemen, the protesters opened fire leading to the death of a policeman while the others fled.

Though Police was still yet to release a statement as at the time of filling this report, but sources who spoke on condition of anonymity, said: “Several cars were damaged following the pandemonium that ensued as the protesters opened fire on the police team leading to the death of a police corporal.

“The corporal who was on special duty at the scene of the incident identified as Stanley was until his death attached to the Ughelli Police Area Command.”