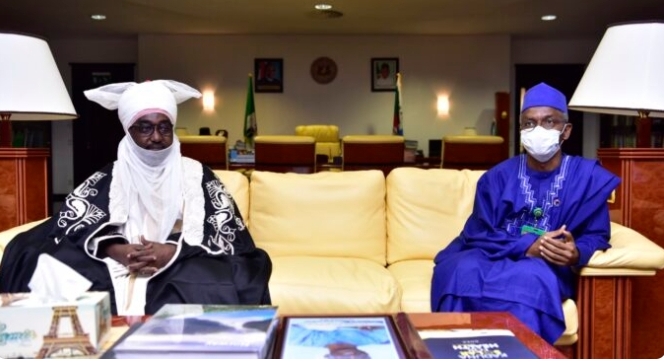 El-Rufai to Emir of Zazzau: God chose you through us, bring everyone together

The Executive Governor of Kaduna state, Nasir El-Rufai has admonished the new Emir of Zazzau, Ahmad Nuhu Bamalli to be fair and just to everyone.

This advice was given by the Kaduna state governor, El-Rufai while hosting the new emir and members of the Zazzau emirate council at the government house in Kaduna on Wednesday.

El-Rufai praised the emir for his ‘bridge-building efforts’ and encouraged him to continue in that effort bearing in mind that he was “chosen by God out of many”.

“God has chosen you, through us, the government of Kaduna state, and my appeal is to continue to bring everyone together, everyone close. Tap into the years of experience that the council members have accumulated in the administration of Zazzau emirate,” el-Rufai said.

While advising the new emir on the essence of unity, El-Rufai called on him to be fair and just, saying the competition is over.

“Working together will make Zazzau emirate achieve great strides in development, peaceful co-existence and unity. I call on the Emir to be fair and just to everyone: those that supported him and those that did not because the competition is over and the hard work now begins.”

Speaking on the development, the new Emir, Bamalli said he is reaching out to each and every contender to the throne in order to move the emirate forward.

The emir, who noted that it is not an offence showing interest in contesting the emirship position, called on other ruling houses to join him in serving the people.

According to the new Emir, the pride of every Prince is for one day to become the king and it is not an offence for any interested person to contest for emirship position but we will have to close ranks, come together and then serve the people after the contest.

“The level of cooperation that I received from the kingmakers, other council members, district heads, and the people of Zaria is unprecedented in the last one week.”

Bamalli who insisted that he will not alienate or sideline any of the ruling dynasties further stated that he has served as Magajin Gari for 19 years and he is in possession of needed and adequate experience to tag along with everybody.

“We have already discussed on the way forward, which Insha Allahu, in the next couple of days, we will be back to the state government to present our position, so that we can move forward.”

The emir expressed his desire to build on the foundation laid by his predecessors “so that we can have a sustainable and good system of administration”.

Recall that one of the princes who contested for emirship and lost, Bashiru Aminu filed a suit against El-Rufai barely two days after Bamalli was appointed as emir.

Aminu, who holds the traditional title of Iyan Zazzau, is seeking an order setting aside the appointment of Bamalli and a declaration that “he has thus acquired vested right to the stool of the Emir of Zazzau from the date of his selection having scored the highest number of lawful votes cast by the kingmakers”.