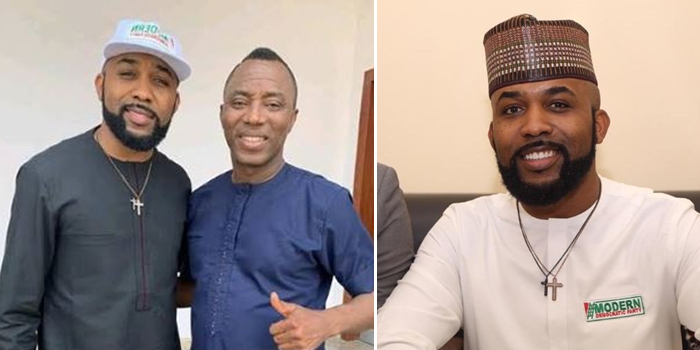 Just like Sowore, Nigerians warn BankyW not to interfere in #EndSars protest

A Nigerian identified as @BrianJDennis and some other people on twitter has warned popular musician and former presidential candidate, Olubankole Wellington, popularly known by his stage name Banky W to stay away from the #EndSars protest.

According to Brian, since Sowore was not allowed to to join the Abuja #EndSars protest, Banky W should not be allowed also because they are both politicians.

“If Sowore does not have a say, Banky W does not. Both of them are politicians. Let’s keep the energy” she tweeted.

This comes after the musician made a suggestion on how Nigerian Youths can go about the #EndSars protest and come out victorious. The tweet which has already brought down by BankyW, caught alot of peoples attention on twitter and many expressed their thoughts.

@MrOdanz wrote “A Politician who contested in the 2019 election is out here trying to act like he is an “ally” of the youth… They’ve sent him for their divide and conquer strategy and he is using his other celebrity friends to achieve his aim..Dear Nigerian youth, please resist this!! ”

@dondekojo wrote “Young people are about to learn a very important political lesson with this “voting for representatives” thing with Banky seriously trying to be the intermediary.”

@Olalee__1 wrote “I was saying it since .. Banky want by sll possible means get into that pocket of space .. he wants a?platform so badly cause of his agenda”

Although, Bankyw’s wife, Adesuwa was very defensive of her husband, Nigerians attacked her also.

“He contested under a party that wasn’t known. Used his own income. Gave up endorsements to run. There are people that are good that will try to run for office and they should do it without being afraid that they will be targeted because they tried to run to make the system better”

“He hasn’t been sent to divide. He isn’t working with any government and I will and cannot wait back and allow his name to be dragged in the mud. He has marched, given food out in protests, cleaned the streets and done it anonymously for the most part.”

“We are here to fight for Nigeria and EVERYONE that wants the good of this nation should be allowed to fight for it. Trying to divide people and use someone as a scapegoat because you don’t like a suggestion is WRONG. The government is the problem, not Banky.”