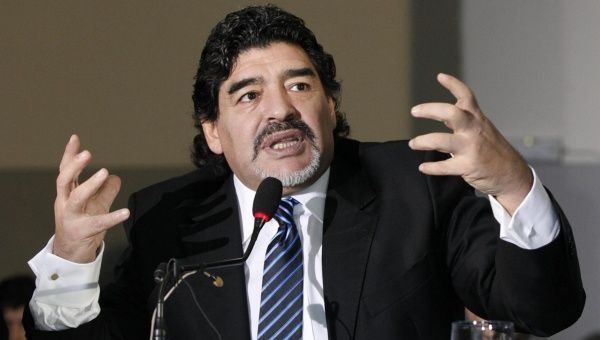 Diego Maradona will undergo surgery for a subdural hematoma within hours, a source with knowledge of the situation and local media said on Tuesday.

The former Argentina football star had been hospitalised since Monday night for anaemia and dehydration, though his condition had been improving, his personal doctor said earlier in the day.

Argentine football legend Diego Maradona “is much better and eager to leave” after being admitted to hospital for medical checks, his doctor said Tuesday.

The 60-year-old is suffering from anemia — a lack of iron in his system — and dehydration, which had left him feeling “very weak, very tired,” Leopoldo Luque said.

“He is much better than yesterday, and he is looking forward to leaving. I would like him to stay one more day,” Luque told reporters outside the Ipensa clinic in La Plata, south of Buenos Aires.

“He is anemic, a little dehydrated, we must correct this and see that he continues to improve,” said Luque.

Fans of Argentine top-tier club Gimnasia, where Maradona is coach, flocked to the clinic to leave messages of support for the ailing icon.

“What he needs most is the support of the people,” Luque said.

Normally, Maradona’s current ailments would require he stay approximately three days in hospital, the doctor said. “That’s my goal, but he has autonomy and can go.”

When he does leave hospital, he will need long-term outpatient care for anemia, the doctor said, adding that because of a gastric bypass Maradona underwent in 2005 to lose 50 kilos, his body has difficulty retaining iron, leaving him prone to the condition.

Maradona, who celebrated his 60th birthday last Friday, was admitted to hospital on Monday. The doctor had ruled out any link to the coronavirus pandemic, which is ravaging the South American country, much of it still under confinement.

Maradona, who has a history of drug and alcohol abuse and poor health, is considered at high risk of coronavirus complications should he be infected.

He has suffered two heart attacks in the past and contracted hepatitis.

Though he has recovered from a well-documented addiction to hard drugs, Maradona takes medication in the form of tranquilizers and anxiolytics.

“With a patient on medication, there are times when hospitalization serves to adjust that medication. That’s good,” said the doctor.

The former Argentina captain led his team to victory in the 1986 World Cup in Mexico. Along with Brazil’s Pele, Maradona is widely regarded as the greatest player of all time.