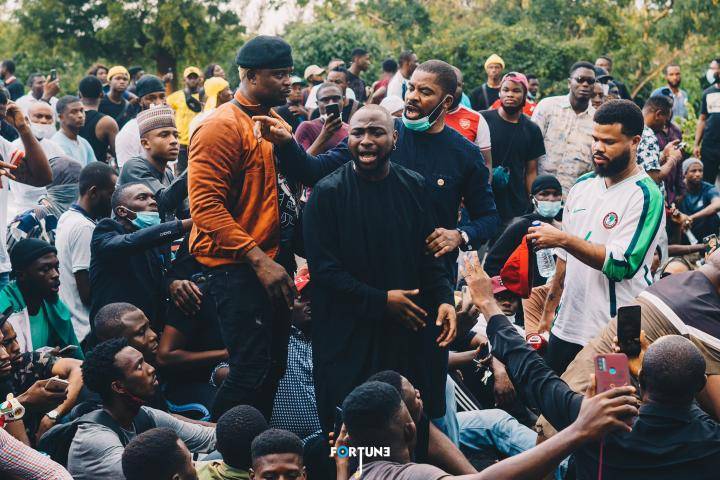 David Adeleke, a Nigerian singer better known as Davido in a recent interview talked about his participation in the #EndSARS protests. OBO as he is fondly called revealed that the female #EndSARS protesters gave him the courage to join the campaign against police brutality.

Davido, while speaking on Apple Radio’s Africa Now with DJ Cuppy, added that when he got to the protest ground, the protesters were angry at him for joining them late.

“I got my courage from all the other youths that went out there before me. They had been protesting for days before I even went there. I would say those people gave me a lot of courage especially the females, the women that were there protesting.

When I first got there they were attacking me and people were even angry at me that why am I just coming? Where have I been? I could see the pain on the faces of Nigerians. Especially with the background that I am from, I felt it would be very insensitive for me not to lend my voice.

The next day, I went to see the Inspector General of Police and it was not really productive if you ask me. What I mean by productive is the fact that they did not act on our demands.”

The Fem singer commented on his viral picture where he was seen sitting on the ground with other protesters with his hands raised in the air. He explained that it was his way of signalling that he came in peace.

“In the picture of me that circulated around social media where I was sitting on the floor with my hands in the air, all I was trying to do was to inform them that I come in peace. I watch a lot of news and protests that are staged all over the world and that is what I see them do. That is why I asked everyone to sit on the floor. It was amazing to be part of that.

“Fem being the anthem for the protest was just a matter of timing. I recorded Fem since May. There is a post on my page where I put a 20 seconds snippet of Fem way back in June. I did not see this coming.

When I released the song, I realized that three weeks later everybody was singing it at protest grounds. When I went to the National Assembly building they said that I went to record a song for them. I had to explain to them that I had recorded the song since June. I was happy that they used my song as a voice for a non-violent protest. They were really enjoying it.”