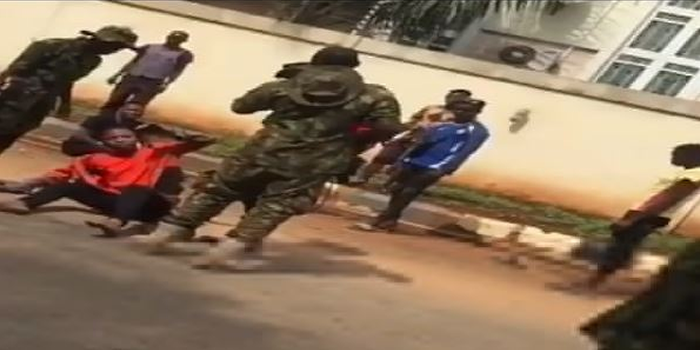 Delta-based activist, Harrison Gwamnishu took to his social media page Sunday to report a case of alleged human right abuse meted on some residents of the state by some yet-to-be identified security operatives comprising of the military, Civil Defence and the Police.

This is coming weeks after citizens rallied en masse to protest against police brutality in the country. According to Gwamnishu, security agencies continue to brutalise residents in Delta State despite the nationwide protests which rocked the country October and government’s promised intervention to curb the menace.

In Gwamnishu’s word, “right now, citizens are ready for another mass Protest if the Government fails to address this inhumane treatment by this joint patrol team.”

Taking to Instagram, Gwamnishu posted a video of the scene of the inhumane treatment and wrote;

Watch the video filmed by our intelligence department. Citizens were dehumanized by the Army, Civil Defence and the Police.

Right now, citizens are ready for another mass Protest if the Government fails to address this inhumane treatment by this joint patrol team.

These Security team can be positioned in strategic locations and provide adequate security and not by stopping and humiliating road users.

As the Youth Representative in the Judicial Panel of Inquiry, I have called the attention of the State Government to this and will give them time to act.

Please share the video and let this be evidence that we are seeing what’s going on in Delta State.

WHEN WE CALL, JOIN US AND SORO SOKE