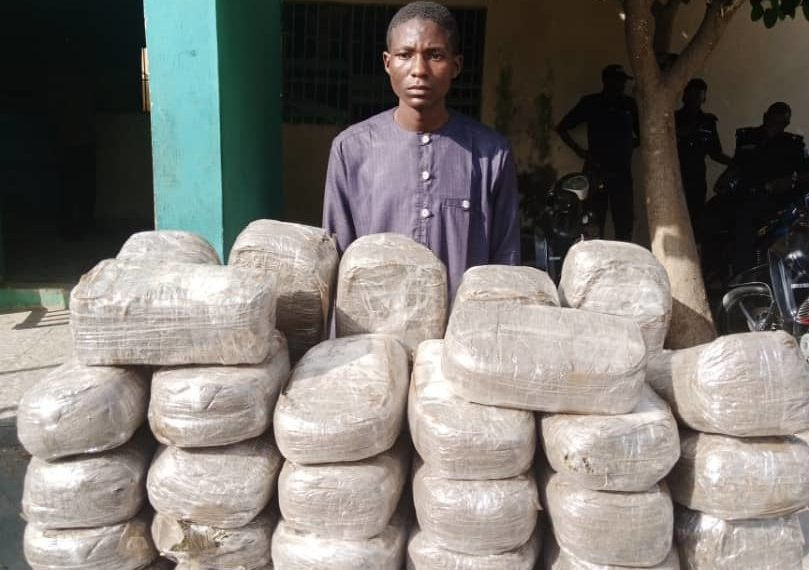 The police in Kano has arrested a 21-year-old, Kabiru Mahmud, alongside his mother and uncle for being in possession of 49 parcels of Indian hemp.

Mahmud was arrested at Danbire village while transporting the substance from his family home at Gadonkaya quarters to a hiding place on the outskirts of Kano metropolis, after the police received an intelligence report of a young man carrying sacks believed to be Indian hemp.

It was gathered that the suspect’s mother had directed him to move the substance from her matrimonial home at Gadonkaya quarters to Danbire. During a phone conversation, Mahmud’s mother told him that the police has arrested his father with Indian hemp and that he should get rid of the Indian hemp kept in the home in anticipation of the arrival of the police.

“I called my friend at Danbire that I will bring the substance to his residence. My uncle called a tricycle rider, we loaded the substance and moved it to Danbire. Upon our arrival, the operatives of Anti Daba arrested all of us.”

Kano police spokesperson, Abdullahi Kiyawa said the Commissioner of Police has directed that the case be transferred to the state CID for further investigation. He also ordered an investigation into the source of the substance and how it was smuggled to Kano.