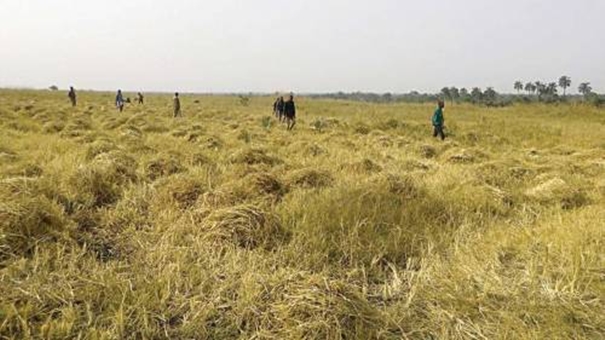 Agricultural instability has been threatened by the tragic murder of over 43 farmers in Borno State by suspected members of Boko Haram, farmers from the state said on Sunday.

According to them, the number of farmers massacred in the attack could be more than 43, as many persons were still missing.

They disclosed this in a statement issued to journalists in Abuja as a reaction to the death of 43 rice farmers who were killed on Saturday while harvesting their crops at Garin-Kwashebe rice field, about 20km north of Maiduguri.

The statement signed by the Managing Director, Wal-Wanne Group, Abiso Kabi, said the sad incident would not only cause instability in the zone but would lead to poverty and make the people be over-dependence on aid.

Kabi said the Koila Agro-Allied Nigeria Limited was the most affected company, as it lost many of its farmers to the attack.

He called on the Federal Government to recruit more persons into the civilian joint task force to boost security in the state.

He said, “About 43 persons have been buried, but we are not sure these are the exact numbers that are dead because some people are still missing.

“We are tired of the situation, just when we thought we had got our farmlands back to support agricultural development and fight hunger in the country, we keep waking up to sad events.

“We can’t continue to go out to our farmlands and risk being killed by the insurgents.”

Kabi called on the government to come up with measures that would enhance public confidence in the security and intelligence agencies.

“We may be facing a severe food security crisis due to the destructive activities of bandits who are not only destroying farms but also killing farmers,” he said.

The president of the All Farmers Association of Nigeria, Kabiru Ibrahim, told Daily Trust on Sunday that some farmers had abandoned their harvests for fear of attacks.

He said many farmers had lost their investments and means of livelihood.

Nigeria to spend N7.8 billion on entitlements to ex-presidents, VPs,…