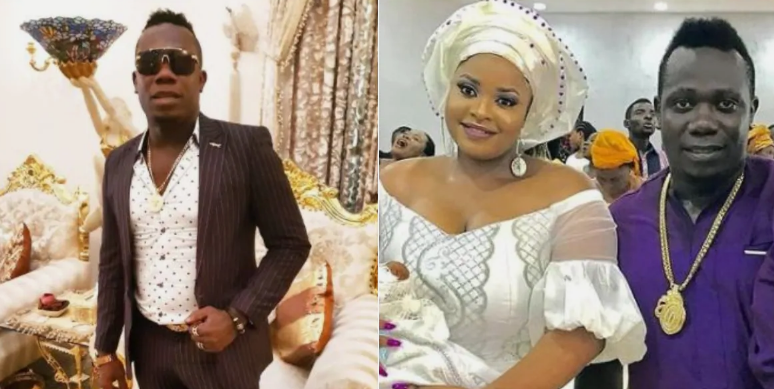 Duncan Mighty Accuses Wife Of Using Juju On Him, Plotting To Kill Him And Take Properties

Duncan Mighty, a Nigerian singer, has recently left his fans uneasy after making serious allegations against his wife, Vivien, and her family; accusing them of trying to use juju (witchcraft charms) on him so he can will all his properties to them.

According to the music star, his wife once confessed to him about how she and her family were in awe of his numerous properties and plotted to kill him to have control over them.

The River State born singer said that his wife confessed to visiting several native doctors where she got several charms to she was to use on him. According to him, whenever he achieves any feat or begins a new building, his wife always tells him to lodge both of them in a guest house, there she would cut his finger and toe nails to begin the manipulation process.

He said that this is coming after she told him to will his properties to her since he is the only child from his parents. Born Duncan Wene Mighty Okechukwu, Duncan Mighty revealed that they just had a ceremony for the dedication of his second child, Mitchell when his wife started displaying at midnight and also confessed of all her atrocities.

He made all this known via his Instagram page, he shared photos of his estranged wife’s mother, elder sister and brother. Apparently the musician had already typed the revelation write-up on his phone before sharing it online.

Read some part of his statement;

“They always talk about my properties and too many investment at a young age so they went to the highest Juju (witchcraft/voodoo) to get a powerful charm as a spell to command me to do whatsoever she asks me to do…and a poison that will first shrink me for a year and then everyone will be saying I’m doing drugs or infected with an incurable disease. They went to 3 different fetish doctors, did all the blood sacrifice, and brought the native doctors to my house and buried two charms with a hidden coven that she will be worshipping. The native doctor told them to get my picture, sand and boxers from bedroom. They put liquid poison in food and bathing water. Native doctor also told them to cut Duncan’s nails both hands and foot when sleeping and bring it to the shrine as final sacrifice then …….”

Before now, the musician has been posting pictures of only him and his son, Icon since March during the lockdown, however, this news still comes as a shock to many.