Jim Iyke, a popular Nollywood actor, took to his social media page to share his near death experience.

The 44 year old thespian recounted how he miraculously survived a car accident on Sunday, December 13th.

Born James Ikechukwu Esomugha, the movie star shared the testimony with his over two million Instagram followers. Jim Iyke star revealed that he, his driver, and a third person in the car, Mike, came out unscathed.

According to him, he was on his way to singer, Tekno’s music video shoot when the accident happened.

Iyke who was thankful to God for miraculously sparing his life and the other people in the car, noted that even after the accident, he was still able to do everything he set out out to do that day. Adding that he had his smile on all through, and insisted the show must go on.

“HAD AN ACCIDENT ON MY WAY TO SHOOT THIS MORNING. MY DRIVER, MIKE AND I ALL UNSCATHED. MY SMILE UNSCATHED.

“BUT THE SHOW MUST GO ON. GOD IS SUPREME. SHOOTING ALHAJI @teknoofficial video “DESIGNER”. ITS MADDDT! ITS A FULL MOVIE MAAAN!”. 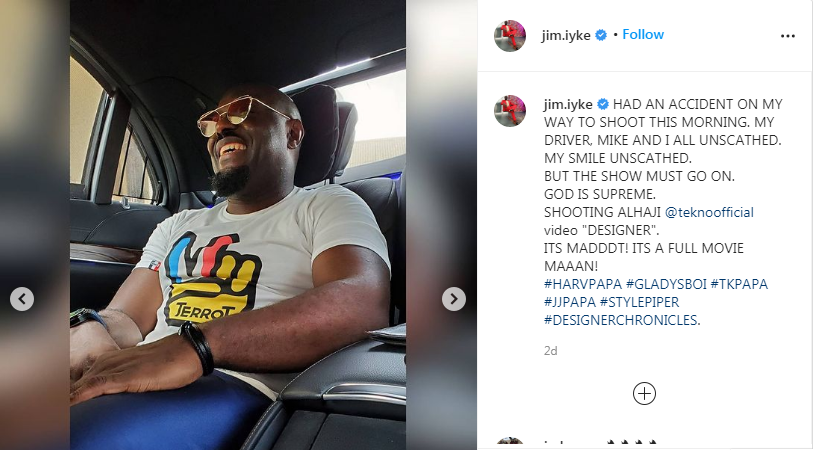