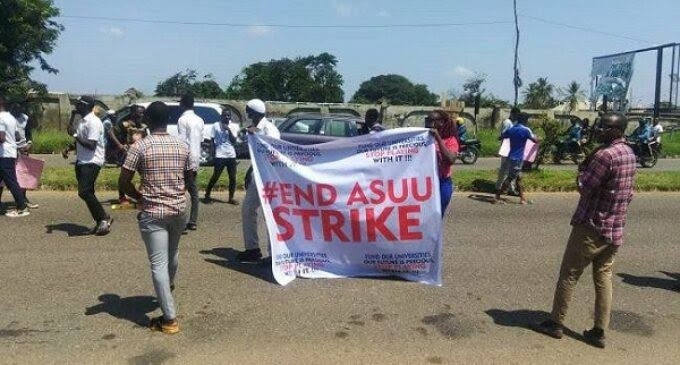 A People’s Democratic Party (PDP) chieftain in Enugu State, Dr Anayo Onwuegbu, has said that the protracted strike by the Academic Staff of Universities (ASUU) was a big threat to national security.

Onwuegbu, who spoke shortly after being conferred with the honorary doctorate degree in Business Administration ((Honoris Causa), at the fifth special convocation by the Alex Ekwueme Federal University, Ndufu-Alike (AE-FUNAI), Ebonyi State, on Tuesday, appealed to ASUU members to sheathe their sword and return to classrooms for the sake of security of the country.

He reasoned that it was very dangerous for the young population of Nigeria to be out of school for nine months, pointing out that every Nigerian was at the receiving end in the unending imbroglio.

“The government has made a wonderful gesture and I think that well-meaning Nigerians need to intervene and talk to ASUU. It’s high time they tried to thinker about their hard posture.

“You can never wish away that the country is going through a very excruciating period of economic turn down. So, I would rather add my voice to those who have been calling on ASUU to have a rethink and embrace the offer the federal government has made and return to the classrooms because after all said and done, we are still Nigerians and our children are the ones bearing the brunt.”