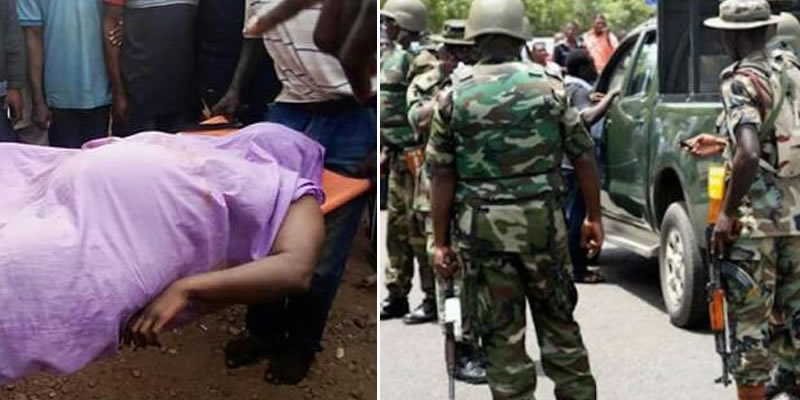 A stray bullet from soldiers who allegedly shot indiscriminately while chasing a driver has killed a 28-year-old pregnant woman, identified as Marian Pelemo in Kogi State on Wednesday December 29on .

WITHIN NIGERIA learnt that mother of one was struck by the bullet while she was sitting in front of her family house at about 9 pm in Magongo, Ogori/Magongo local government council of the state.

According Nigerian Tribune, the deceased’s elder brother, Idowu Pelemo, who spoke on the tragic incident revealed that, the soldiers in a three-vehicle convoy including a Hilux van with registration number Lokoja 446 KG and another painted in military colour with registration number 014, chased a driver to the area where the incident happened. When the driver got to Magongo, he jumped out from his vehicle and fled.

The Military men started shooting sporadically after the driver escaped. His sister who was standing in front of her house was hit by a stray bullet.

He said the uniformed men rushed his sister to the hospital and escaped while she later died that same night.

“Those men in military uniform normally station their vans along Ageva. From what one of the soldier men told me, he said they wanted to arrest the driver because the driver and some of his colleagues misbehaved to some of their officers in Okene. He mentioned that the men in army uniform, following a tip-off ambushed the said driver who was coming from Ibilo in Edo State.” said Mr Pelemo.

When Nigerian Tribune called on the Public Relations Officer (PRO) of the Nigerian Army in Kogi State, Major Jafaru Muhammed, he said “the Army was not involved in any operations please.”

Confirming the incident, a community leader who simply identified himself as Chief Obaro, said that the driver who was conveying goods and passengers from North Central to south west on sighting the army van jumped out of his car and started running away while the soldiers started shooting sporadically and indiscriminately.

“It was one of the strayed bullets from the soldiers that killed our sister.” said Obaro.

The remains of the woman has been deposited at Toah Mortuary, along Agba/Ilekpi Road, Lampese-Okpameri in Akoko Edo LGA of Edo State.