by Sodiq Adewale Chocomilo
in National
0 0
A A
0

The launch of the National Identity Management Commission (NIMC) mobile app has been approved by the federal government for subscribers to link their national identification number (NIN) with “up to six extra” phone numbers.

The launch of the application was announced in a statement released by Femi Adeluyi, technical assistant of information technology to Isa Pantami, minister of communications and digital economy. 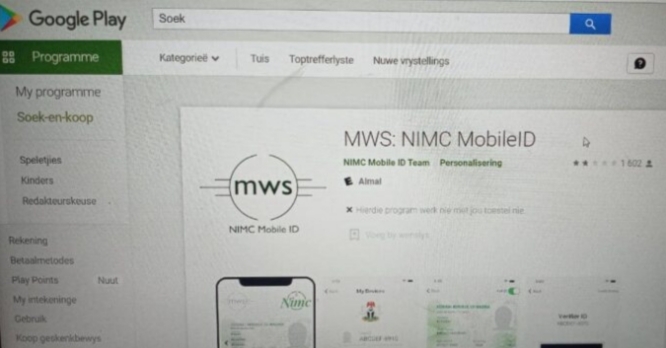 A two-week deadline was initially given, but later, the federal government extended the period for subscribers to link their SIM cards with NIN to January 19, 2021.

Findings revealed that the application is not yet available on the Google or Apple play store but it can be viewed using a laptop or desktop computer.

The app — MWS: NIMC MobileID — has some part of it written in Afrikaans, and information on it provides steps to link the NIN to the phone numbers.

“In this official release, you may add up to 6 extra Mobile Numbers to comply with the requirements of the NCC to link your Mobile numbers to your NIN. Do it securely and safely from the comfort of your home. The NIMC will handle the rest for you.

“Look for “My Devices” on the main dashboard and enter the Mobile Numbers, one after the other. If you carry out this exercise before the 31st January 2021, the verification OTP will be delivered FREE. After that date, the Telco will be responsible for determining any SMS charges.”

However, according to Adeluyi, the app is expected to enhance the process of obtaining an identity number and for subscribers to link it to their SIM cards.

“The App provides a secure channel for all Nigerians and legal residents to easily verify and authenticate their identities on-the-go using smartphones. It also enables them to link the NIN to their phone numbers,” Adeluyi said.

“The development of the App and other tools to support the National Identity Number (NIN) process align with the National Digital Economy Policy for a Digital Nigeria.

“The App offers a built-in harmonisation process that allows for its use across other government services including the NCC, Federal Inland Revenue Service, Federal Road Safety Commission and National Health Insurance Scheme, to mention a few.”

The technical assistant added that a self-service portal for downloading the NIN slip has also been launched.

“On the other hand, the new improved NIN slip is a pocket friendly and an easy to verify version of the NIN. It can be accessed via a self-service portal, where people who already have been issued the NIN, can log in, download a PDF of the document in colour (if preferred), print and laminate as desired. The current NIN Slip will remain valid and will be gradually phased-out,” he said.

“The Honourable Minister has directed NIMC to respond to enquiries and also provide multimedia guides to make it easy for users to obtain their improved NIN slips and install the App.”

17-year-old girl who traveled 210kms to see a man she met on Facebook, raped by 3 men