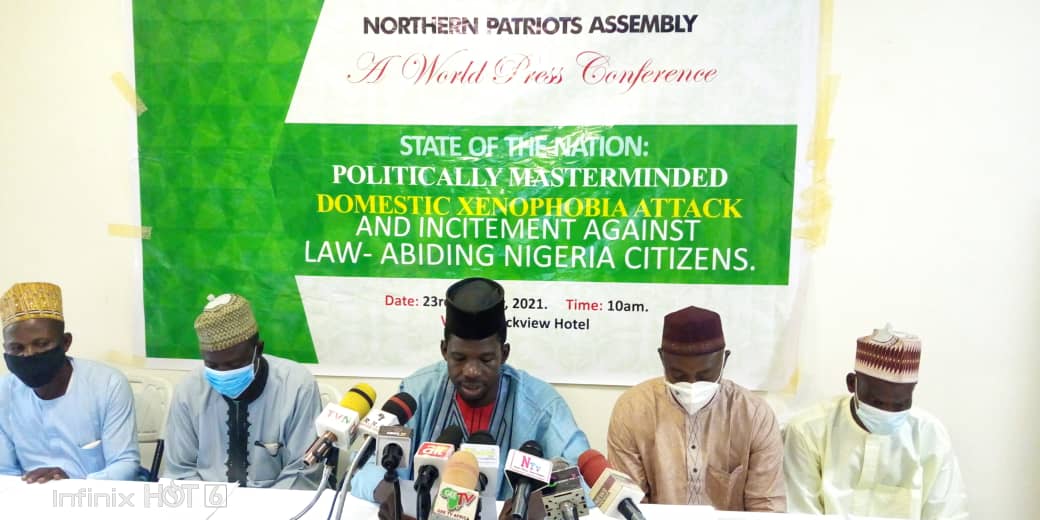 The NPA, which made this known at a press conference on Sunday in Abuja, said the quit notice has Tinubu’s handwritting all over it.

Recall that Governor Akeredolu had on Monday issued a seven-day ultimatum to herders to vacate forest reserves in the state.

This has led to tension across the South-West, with self-acclaimed Yoruba activist Sunday Igboho leading an assault on herders in Oyo.

However, in his address, NPA’s Chairman, Board of Trustees, Alhaji Salihu Mohammed, said Tinubu should be the one in police custody, noting that the threats, suspense and heating of the polity are his handiwork.

According to Mohammed, Tinubu’s aim is to make the country ungovernable knowing fully well that his presidential ambition can no longer be realised.

He noted that this is not the first time the All Progressives Congress chieftain’s subversive activities have come to the fore as he was alleged to behind the EndSARS.

The group, however, called on the IG to arrest Tinubu and all his cohorts involved in this sacrilegious act against the Constitution of the Federal Republic of Nigeria.

Our Distinguished Comrades in the pen profession, we have called on you again as our partners in progress, to brief you on a very important matter and to state our position over an issue which is threatening the cohesion, well being and sovereignty of our dear nation, Nigeria.

You are aware that the governor of Ondo State, Mr. Rotimi Akeredolu, only last week, gave a seven-day ultimatum to all Fulani herdsmen in Ondo State to vacate certain parts of his state.

The governor was said to have given the ultimatum while meeting with leaders of Hausa/Fulani and Ebira Communities in the state at the Cocoa Conference Hall of the Governor’s office, Alagabaka, Akure, the state capital.

Mr Akeredolu at the meeting, was reported to have said the activities of the herdsmen have causing a threat to security in the state and that these unfortunate incidents are traceable to the activities of some bad elements masquerading as herdsmen who have turned the forest reserves into hideouts for keeping victims of kidnapping, negotiating for ransom and carrying out other criminal activities.”

He said as the Chief Law and Security Officer of the State, it is his constitutional obligation to do everything lawful to protect the lives and property of all residents of the State and issued the quit notice to the Fulani residing in certain parts of the state.

Gentlemen of the press, you are aware that immediately the governor gave the order, all manners of reactions followed.

Some have urged him on while others have tried to call him to order and to guide him about the stupidity of his action and to make him see reasons to backtrack.

The Northern Elders Forum for instance drew the attention of the governor to the inanity of his actions which was quickly followed by a reprimand by the presidency.

The presidency said rather than issue an ultimatum, the state government and the leadership of the Fulani communities in Ondo state should dialogue for a good understanding that will bring to an urgent end, the nightmarish security challenges facing the state.

The presidency then warned that the action of Akeredolu could set off a chain of events which the makers of our constitution foresaw and tried to guard against stressing that insecurity is not alien to any group, the language they speak, their geographical location or their faith.

THE VIOLENCE THAT FOLLOWED

True to the predictions of the presidency, a certain character indentified as Sunday Igboho apprently acting on the orders of Akeredolu, took the law in his hands and began to issue threats to the Fulani living in Yorubaland.

Shortly after that, Igboho, who is now being referred to as a Yoruba activist, began to expel Fulanis from certain parts of Yorubaland.

Then on Friday, Igboho and his supporters stormed a community in Oyo State and began to evict the Fulani from the area.

Igboho said he acted on the request of traditional rulers who he said protested they were helpless about incessant killings and kidnappings.

The action of Igboho even led to violence when he stormed the Fulani settlement in the town to eject the Seriki Fulani, Salihu Abdukadir, and some other herdsmen accused of fuelling security problems in the area.

Unconfirmed reports claimed that some persons were killed while properties worth several millions of naira were set ablaze during the clash which occurred in the evening.

THE VOICE OF JACOB

All these threats, suspense and deliberate heating of the polity we believe are at the instigation of the so called Southwest political leader, Mr. Bola Ahmed Tinubu all in the name of politics.

We cannot but see the hands of the Tinubu in all these because of his inordinate ambition to become the president of Nigeria and his penchant for bellicosity anytime he is targeting a political prize horse.

Tinubu as we all know is seriously eyeing the presidency come 2023. But as we inch closer to the election year, it is becoming glaring to him that the odds do not favour him.

Instead of accepting his fate quietly as power does not come from man, Tinubu is trying upset the apple cart by heating up the polity and making the country ungovernable.

This is with the hope that after he has turned the country upside down,  that he will be called to the negotiating to state his demands where he will insist that the presidency be handed over to him or the mayhem continues.

This is self serving and unpatriotic act that should be condemned by all. A country cannot be set ablaze just for the ambition of one man no matter how stupendously rich he thinks he is.

This is not the first time Tinubu would be involved in subversive activities against the Nigerian Stste due to his inordinate ambition.

You will recall that he tried to betray Abiola by asking the military junta of Abacha to make him governor of Lagos State.

It was when the latter refused that he intensified activities with NADECO and deceived many that he was fighting for democracy and joined in the call for sanctions against his own country.

Till date, he is yet to clear himself of the certificate scandal that dogged his tenure as governor of Lagos State.

In the build up to the 2015 elections, he did not mind the turmoil and acrimony that would have  followed once his ambition is met but insisted he be made the running mate to Buhari for a Muslim-Muslim presidential ticket of the APC.

Last year, the former Lagos State Governor was also fingered as one of the sponsors of the EndSars protests which almost destroyed Nigeria.

Many online media reported at the heat of the protests that Bola Tinubu was sponsoring the #EndSARS protests in the South Western part of the country in order to cripple the country and disrepute the administration of President Muhammadu Buhari on the global front.

Though Tinubu issued a statement to deny sponsorship of the protests, his reasons were not convincing enough.

For instance he said it is not possible for him to be sponsoring the massive protest in all the states of the federation that it has occurred and that though he believes in the right of Nigerians to freedom of expression, assembly,  he has always canvassed the need for people to explore peaceful channels to ventilate their views and demands.

This is an admission that he can only sponsor such protests in some parts of Nigeria.

The Northern Patriots Assembly therefore cannot pretend about the activities of Tinubu especially this recent one as it constitutes acts incitement aganst a particular ethnic group.

This is similar to the kinds of actions that led to the xenophobic attacks on Nigerians in South Africa few years ago which we all condemned.

The perpetration of such acts, targeted at wiping out people based on race, is well captured under the United Nations instrument for genocide.

But we cannot sit and allow things to deteriorate under the guise of being politically correct. Doing so would be suicidal.

We therefore call on the Inspector General of Police to arrest Tinubu and all his cohorts involved in this sacrilegious act against the Constitution of the Federal Republic of Nigeria.

No one is in support of act of criminality by bandits, criminals and kidnappers anywhere in the country. But we will also not allow anyone no matter how highly placed to destabilize the nation through the back door.

We are happy by the steps taken by the Oyo State governor to dissociate from this attempt at genocide.

Other state governments in the Southwest must do the same and arrest Igboho if he comes into their territory.

A stitch in time, they say, saves nine.