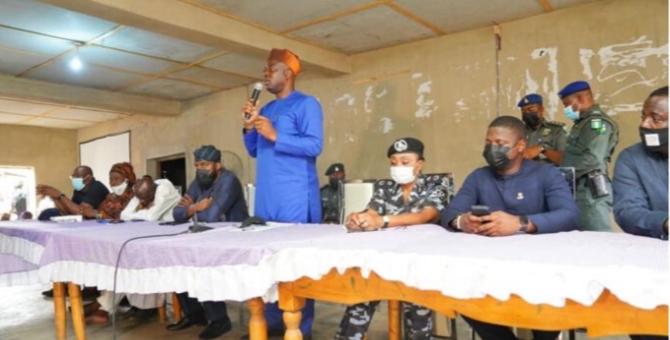 The Executive Governor of Oyo State, Seyi Makinde on Monday disclosed that he will not allow anyone to start an ethnic war in the state under his watch.

He also stated that all victims of criminal activities will be compensated by the state government.

This was contained in a statement released on Monday by Taiwo Adisa, the chief press secretary to the Oyo state governor after Makinde held a meeting with leaders in Ibarapa area.

Recall that there have been several kidnappings, killings and clashes between herders and indigenous farmers in the area.

Yoruba activist, Sunday Adeyemo popularly known as Sunday Igboho had also issued a seven-day eviction notice to herders in the area, blaming them for the insecurity.

While meeting Ibarapa residents on Monday, the governor said he felt the pain of the people who have lost dear ones.

He added that the government is taking steps to address the situation.

“I decided to spend the night in Ibarapaland, so as to let you know that if my people in this place cannot sleep with two eyes closed, I cannot also sleep with my two eyes closed in Ibadan. We are turning the heat on the criminal elements and we will surely get them,” Makinde was quoted to have said.

“What happened in Rwanda will not be our portion. If anyone wants to ignite war in Nigeria, it won’t be from here and won’t be under my own watch. We will find a solution to the challenges facing us because we know there are challenges.”

The governor also promised that his government will compensate victims of criminal activities, and added that measures taken to address the situation include setting up an all-inclusive peace and security committee at the local government levels, and stepping up intelligence gathering in the area.

Makinde said he was misunderstood for the position he took during the crisis, noting that he is not afraid to speak out.

He explained that apart from the immediate deployment of 200 additional Amotekun officers to Ibarapaland, security operatives have been directed to improve on intelligence gathering in the area.

“Some of the problems have been existing for years. It is not all Fulani people that are criminals, I must tell you. Some of those caught after a robbery operation at Okeho were Igbira from Kogi state,” he said.

“So, we must strive and do the work that can keep our environment safe. There are a few things the government has promised to do and the central part of it, which we think will help our situation, is identity management. We want to know who is where.”

At the meeting, the governor also warned against attempts by some individuals to politicise the crisis.