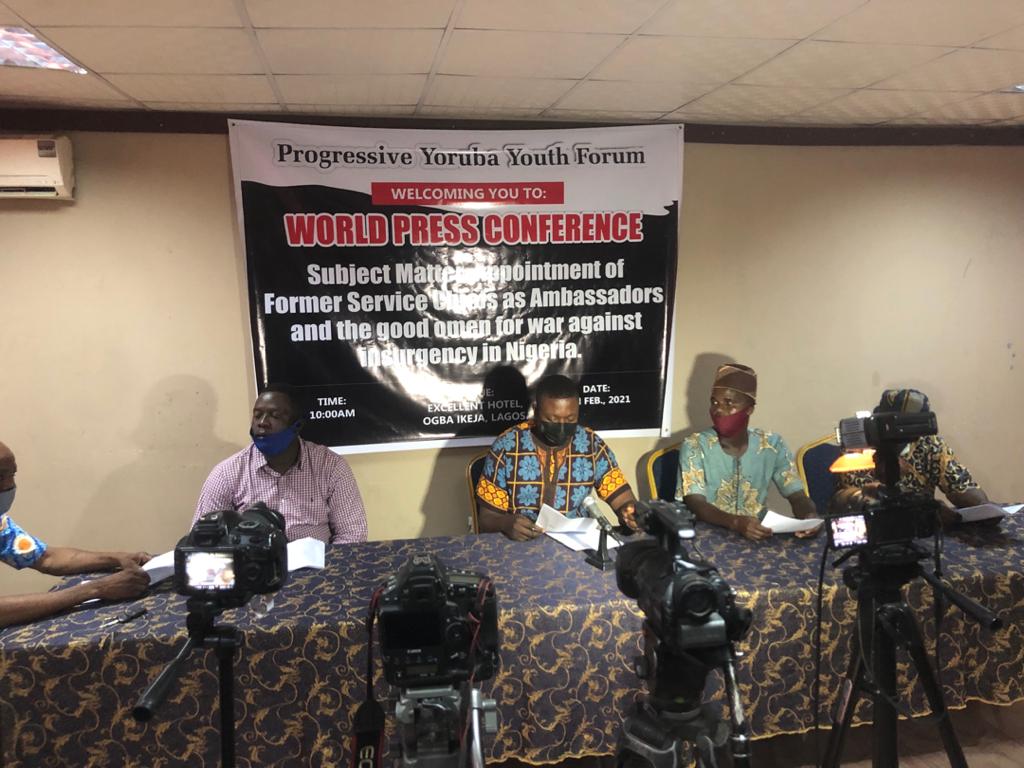 Some youths from the South-West region have welcomed President Muhammadu Buhari’s nomination of the immediate past service chiefs as non-career ambassadors-designate.

Describing them as “worthy ambassadors”, the group under the aegis of Congress of Progressive Yoruba Youths (CPYY) called on the National Assembly to speedily confirm their nomination.

The Yoruba youths made these known on Friday at a press conference in Lagos.

In a statement signed by its leader, Comrade Kolawole Salau and titled: “Ex-Service Chiefs are truly Nigeria’s Ambassadors; a reward for excellence and meritorious service”, the group extolled the virtues of the recently retired military heads.

Salau noted that the nomination is a befitting reward for decades of patriotism, dedication and commitment to their fatherland, especially in the last five years where they courageously led and conquered acts of terrorism, insurgency and insurrection in the country.

According to the group, history will remember the quartet as the finest set of service chiefs who blighted the wildfires against peace and security at the country’s most trying moments.

While applauding President Buhari, Salau said the development would serve as a salient tonic to bolster national service and productivity from all Nigerians holding leadership positions.

He, however, assured that the newest ambassadorial designates would bring their wealth of experience to bear on influencing the global community in assisting Nigeria to address the scourge of terrorism permanently. 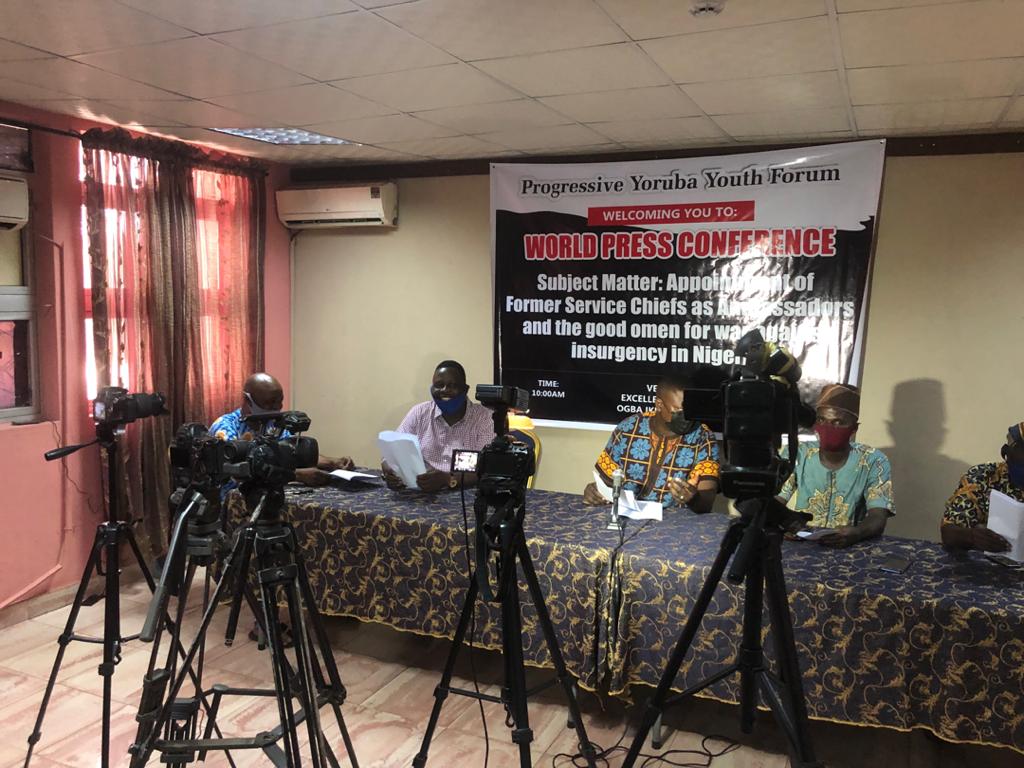 Ladies and Gentlemen of the Media.

May we once again, extend our good wishes to all of us for the New Year and the prayerful expectations of ceaseless goodies in our lives and that of our dear nation. We plead that all Nigerians should always bear this in mind as we enter another outstanding phase in the progressively historic match of Nigeria to the #NextLevel under the focused leadership of President Muhammadu Buhari, GCFR.

The Congress of Progressive Yoruba Youths’ (CPYY) leadership and its teeming members wish to celebrate and share the good tidings with all Nigerians. We were exceeding filled with ecstasy over the sudden news of the nomination of the erstwhile Service Chiefs as Nigeria’s non-career ambassadors -designate to serve the nation in another sensitive capacity.

It’s a thing of joy that Mr. President has already forwarded to the National Assembly, names of these dedicated and committed former Military Chiefs for confirmation. These ex-Service Chiefs have rendered decades of unfaltering, patriotic and dedicated service to their fatherland at the zenith of their career, especially in the last five years they superintended over counter-insurgency operations and courageously conquered acts of insurgencies and insurrections against the country.

So, let us congratulate these worthy Ambassadors in advance in anticipation of a speedy confirmation of these ambassadorial nominees by the national parliament. Nigerians excitedly look forward to this moment with drums and songs as a reward truly befitting of these former Military Chiefs who have diligently and uncompromisingly served the country, first, as ambassadors of the trenches and now, as fit as fiddle to exemplify same at the diplomatic plane.

Countlessly, we have sensed President Buhari’s conscious attempts to re-work and reposition Nigeria into a nation where every Nigerian who has the opportunity to serve the country in whatever capacity should be proud to discharge his duties committedly at all times, despite any difficulty.  That’s the operational philosophy and disposition of Mr. President as shadowed all through the years of his Presidency so far.

Today, the same Presidential ideology has spontaneously replicated in the success story of the Nigerian immediate past Service Chiefs in their post-service life. This is justified or finds expression in their nomination as Nigeria’s non-career ambassador-designate of the Federal Republic of Nigeria.  It gladdens the heart infinitely.

The CPYY has taken the generous liberty to speak to a Nigerian audience which is not caged by bias, partisan, ethnoreligious or religious sentiments as prevalent in contemporary times in our country. We are wittingly talking to Nigerians who recognizes that national service supersedes personal interests and the worthy sons and daughters of this great nation who have dispensed this responsibility selflessly and committedly should earn our acknowledgement afterwards.

And in the case of the ex-Service Chiefs, they discharged the very arduous or tedious national assignment, even at the risk of their lives with courage, vigour and determination.  They gave us impressive results where others failed. Therefore, they deserve appreciation and reward; but certainly not unjust vilification from the same compatriots they have spent their lives to serve. Only this can compel posterity to also emulate their commendable records in the service to our nation.

We elect upon ourselves to voice out today because as consistent as some unreasonable hardliners attempted to dwarf, diminish, blur and even rubbish the tenures of the ex-Service Chiefs; it is also equally very difficult, if not impossible to annihilate their records in curbing the hitherto widespread acts of insurgencies and insurrections in the country.

On the plaquing insecurities in Nigeria, history will remember these ex-Military Chiefs as one of the finest sets of Service Chiefs who blighted the wildfires against peace and security at the country’s most trying moments. They performed this duty determinedly and served us the best of positive results.

Let’s recap that it has not escaped the eyes of CPYY that the ex-Service Chiefs wrecked the fires of rampaging Boko Haram/Islamic West Africa Province (ISWAP) terrorists in Abuja, Northern cities/ towns; extricated five out of the six states in the Northeast region previously under the unshakable and absolute control of insurgents.  Nigeria has reclaimed these states irreversibly to the painful realization of terrorists under the tenures of the ex-Service Chiefs.

These ex-Military Chiefs significantly stopped bombs from frequently exploding in highbrow areas; female teenage suicide bombers were also harangued out of operations and Boko Haram has been confined to the remotest parts of Lake Chad Basin axis to the extent its leaders have kept lamenting publicly about losing the war. Insurgents previously aggressive infiltration of Southern Nigeria was also halted. Lt. Gen. Buratai (rtd) worked tirelessly in alliance with his colleagues to ensure Nigerian troops birthed peace and security in all troubled areas.

How many of us even recount the tens of thousands of Nigerians held hostage by Boko Haram, but regained their freedom under the past Service Chiefs? Armed bandits were also caged and scores neutralized in fierce combats with troops; do we even remember the subjugation of the oil thieves, armed robbers, kidnappers, vandals or the bloody secessionists’ and another armed criminal/ terror gangs of Southern Nigeria who held the region captive? They have been humbled to their knees.

This is not an attempt to flatter anybody or undermine anyone. But the ex-Military Chiefs made an inerasable difference in the counter-insurgency operations whilst they held sway. We make bold to say since 2009 when acts of insurgencies and insurrections became a national and global security challenge, the immediate past set of Service Chiefs really made Nigeria proud. Until we see, the works of the new and very equally promising Sheriffs who have taken over their responsibility, we dare say, their fond memories are still etched in our psyche.

Therefore, the new Nigerian spirit where merit and hard work are rewarded by the country is reflected in the nomination of these former Military Chiefs. And we are excited at it; as we thank Mr. President wholeheartedly. It’s a salient tonic that would bolster national service and productivity from all Nigerians holding leadership positions and are insightful enough to see the future.

Consequently, the CPYY calls on the Senate to expediently confirm the ambassadorial nominations without any waste of time as a mark of honour for the commitment, patriotism and loyalty which the ex-Service Chiefs had infused into their work for the unity and peace of Nigeria.

We have no ounce of doubt that these Nigeria’s newest ambassadorial designates would also bring their wealth of experience to bear on influencing the global community in assisting Nigeria to address the scourge of terrorism permanently. We perceive these ex-Military Chiefs as immediately striking a filial alliance, which would persuasively extract the support of their foreign countries of accreditations to battle terrorism to its final fatal end.

May God bless our country Nigeria; may He also bless every Nigerian and thank you. 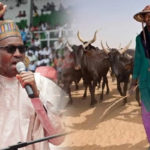