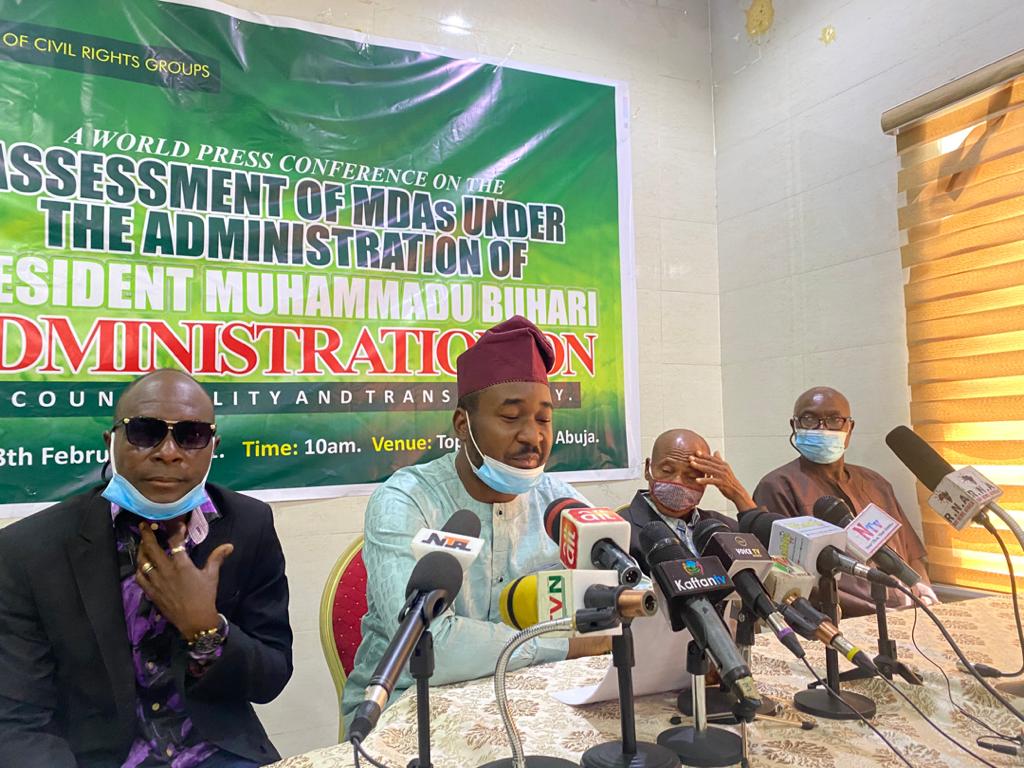 The coalition said it made this conclusion after scrutinizing policy formulation and implementation across the various MDAs.

According to the report, the implementation of the Treasury Single Account (TSA) has ensured that finances of MDAs are subjected to the best possible accountability procedures which have greatly reduced incidence of siphoning off government funds.

The report added that the implementation of Personnel and Payroll Information System (IPPIS) has blocked loopholes that hitherto cost the country billions of dollars.

The coalition also noted that high-profile politicians, civil servants and retired military officers have been prosecuted for corruption, securing convictions in a handful of cases.

The group revealed that there are political undertones to T.I’s low rating of Nigeria, noting that it is hinged on permutations towards causing a distraction for the president.

The coalition, however, advised the Federal Government to institute measures that would keep the citizens abreast of happenings in the polity with regards to the introduction of policies and programmes that affect their lives.

It also charged MDAs to respond to Freedom of Information request in a timely fashion and make such known to the general public in a bid to carry the citizens along at all times. 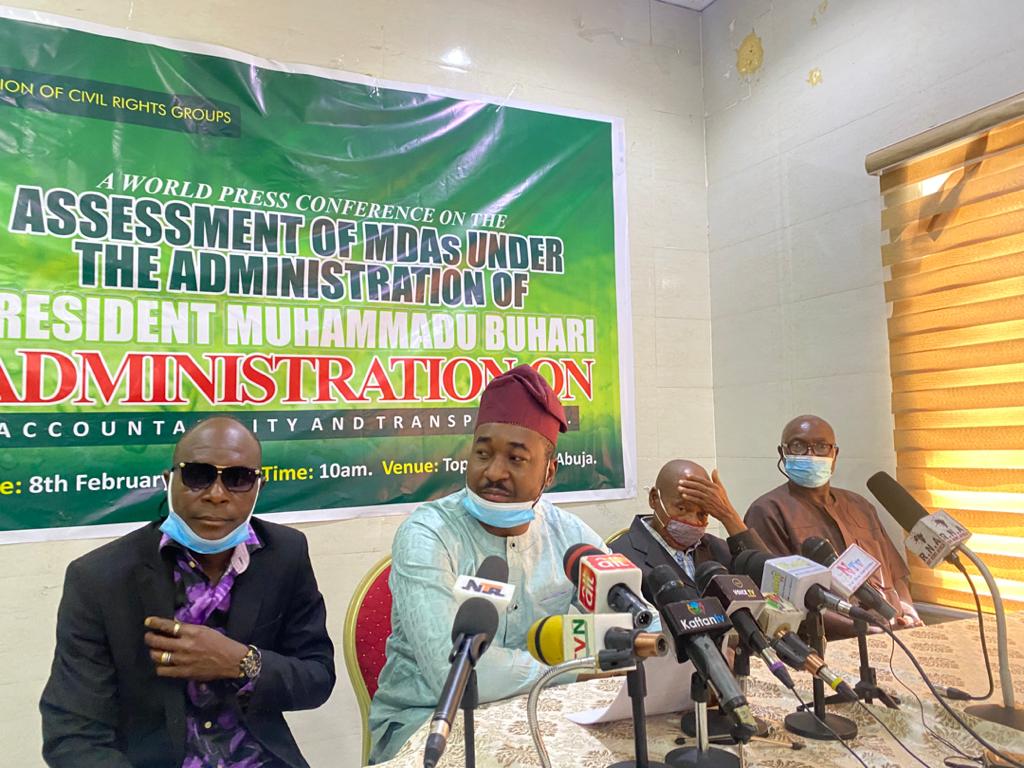 Read the full statement below.

The Coalition of Civil Rights Groups in fulfilment of its mandate of holding government accountable in governance assessed the Muhammadu Buhari administration to highlight the commitment towards good governance in delivering the dividends of democracy to the people.

The assessment entailed detailed scrutiny of policy formulation and implementation across the country’s various MDAs, emphasizing accountability, transparency, and probity. It also touched on the various programmes implemented by the Muhammadu Buhari administration regarding governance, the rule of law, and human rights.

The various social intervention programmes of the Muhammadu Buhari administration were also scrutinized in any objectivity manner, devoid of sentiments to put issues in proper perspectives.

There have been insinuations that Nigeria’s rule of law is selective – the rich and powerful do not play by the rules, which has fuelled corruption in the polity. This has indeed questioned the sincerity of the Muhammadu Buhari administration in the fight against corruption.

There were also insinuations that the operations of MDAs in Nigeria have been fraught with a lack of accountability and transparency, which has aided massive corruption and disregard for extant procurement laws in the conduct of government business.

The implementation of the rule of law was also questioned through allegations that the government has displayed total disregard for the rule of law through questionable actions that undermine individuals’ rights to express themselves on matters of national concern. There were also allusions to implementing a selective justice system targeted at perceived political opponents while shielding individuals and organizations with ties to the present administration from being held accountable for questionable transactions and activities that fuel acts of corruption and undermine sustainable growth and development.

This also on the heels that Transparency International in its yearly report stated that Nigeria had dropped two places down to rank as the world’s 34th most corrupt nation. While this position has been canvassed, the factors responsible were not adequately highlighted.

An analysis of the institutional framework in place negates the claims. This is on the heels that the framework is not subject to manipulations as the various mechanisms in place provide for checks and balances in the conduct of government business.

The Personnel and Payroll Information System (IPPIS) was also identified as one of the measures implemented by the Muhammadu Buhari administration in tackling corruption in the system by blocking loopholes that hitherto cost the country billions of dollars.

Our findings also revealed the prosecution of high-profile politicians, civil servants and retired military officers for corruption and secured convictions in a handful of cases. His administration has also recovered billions of Naira in stolen assets from corrupt Nigerians.

Scores of corrupt politicians across party lines and government officials are currently undergoing trials for various forms of financial impropriety, thereby rating the Muhammadu Buhari’s campaign against corruption as the most intense the country has ever seen.

The Coalition of Civil Society Groups in the extensive analysis of the issues at stake states that what is being propagated in the public space is different from reality. The various indices indicate sustainable efforts towards building strong institutions capable of addressing corruption and other forms of societal ills that retards development.

As discovered in the analysis of issues, there are political undertones to rating the Muhammadu Buhari’s administration low in the war against corruption. This is hinged on permutations towards causing a distraction for the administration.

The Coalition of Civil Rights Groups’ position is that there has been an entrenchment of accountability and transparency in the conduct of government business. The loopholes for siphoning government resources have been blocked. This has also brought about accountability which remains the hallmark of the Muhammadu Buhari’s administration.

It must also be stated that there hasn’t been any tangible evidence that supports the claims of selective implementation of the war against corruption from our analysis. The bulk of the insinuations are hinged on hearsays and illogical conclusions, which remains questionable by all known parameters.

It is thus a statement of the fact that there hasn’t been an era in the annals of the country where the government has displayed an unalloyed commitment to the judicious putting use of resources of the country than now. And those in leadership positions have been tasked through various mechanisms to play by the rules.

Our position remains that the Muhammadu Buhari’s administration has not been found to promote corrupt practices. No record indicates systematic protection for individuals and organizations that runs afoul of the law.

The Coalition for Civil Rights Groups as a result of the forgoing herby makes the following recommendations:

That the government must institute measures that would keep the citizens abreast of happenings in the polity with regards to the introduction of policies and programmes that affect ordinary citizens’ lives.

Through its various MDAs, the government must provide accurate information on burning issues to allow the citizens to make their independent judgment on the government’s efforts in all sectors of the economy.

That the government must engage in town hall meetings with critical stakeholders to allow them to seek clarification on areas that requires attention and collective inputs.

That the government must address concerns in the public space in a most decorous manner without making allegations that smacks a mockery of the whole governance process.

The Coalition of Civil Rights Groups concludes that the Muhammadu Buhari’s administration since inception has been at the vanguard of promoting accountability and transparency in the conduct of government business.