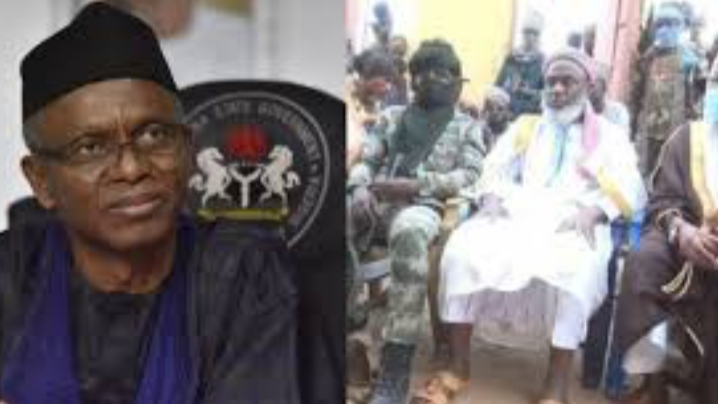 Why should bandits be compensated after killing people, El-Rufai asks Sheikh Gumi

The Executive Governor of Kaduna State, Mallam Nasir El-Rufai on Monday, February 8 asked why bandits who kill and destroy houses be compensated.

The Kaduna governor, El-Rufai stated that the bandits, who were hitherto in the business of selling a cow for meagre N100, 000, cannot agree to drop their arms having received ransom in millions from kidnap victims.

Speaking on the Hausa Service of the BBC, El-Rufai said what the north needs is a strong coordinated fight to end criminal activities of the dreaded bandits, not negotiations.

Recall that Sheikh Gumi had reportedly met several groups of bandits in their camps inside the forests of Kaduna and Zamfara States where he preached to them and their Commanders.

He asked them to drop their arms and embrace peace.

But, El-Rufai in the BBC interview, said the peace deal initiated by the Islamic scholar is a total waste of time.

He argued but for lack of unity among Governors on how to deal with banditry, kidnapping and other related crimes, the bandits would have since been dealt with.

El-Rufai said he does not believe in negotiating with bandits.

According to him: “A Fulani herdsman that was used to only getting a hundred thousand naira in a year, after selling a cow, but now obtains millions of naira from ransom for kidnapping will never stop.

“Sheikh Gumi is my friend. What we discussed about the herdsmen was different from what he is doing now.

“And I believe anyone that tells me the approach is realistic, I will not subscribe to it. He is only deceiving himself and wasting his time, they will not stop,” El-Rufai said.

The Governor argued the criminal herdsmen that kill hundreds of people, burn houses and properties don’t deserve any compensation.

“I never believed that a Fulani herdsman who ventured into banditry and is collecting millions of Naira as ransom will repent. I spoke to Dr Gumi who is my friend, I explained that majority of these bandits don’t believe in the religion. That is why they kill mercilessly.

“Anybody who thinks a Fulani herdsman that was used to only getting N100,000 in a year, after selling a cow, but now is getting millions through kidnapping for ransom will stop, is only wasting his time.

“Why should they be compensated after killing people, they destroyed their houses. Who offended them?

“If any ‎bandit is arrested in Kaduna state, the bandit will be killed because Kaduna is in war with bandits.

“They kill without mercy, they don’t believe in the religion,” he said.