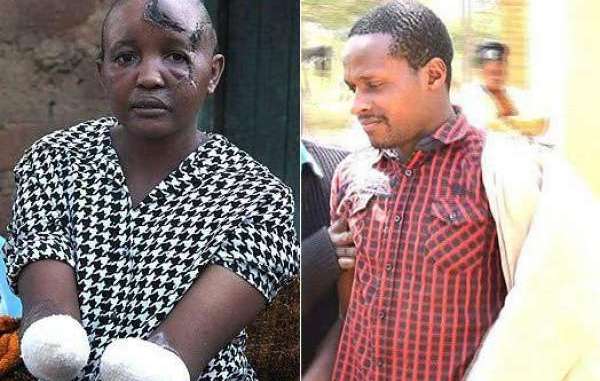 A man who chopped off his wife’s hands for failing to bear him children has been handed a 30-year jail sentence.

The court in Machakos, Kenya, jailed Stephen Ngila, 39, for attempted murder for chopping off Jackline Mwende’s hands with a machete in 2016.

He has 14 days to appeal the judgement.

Justice Brenda Bartoo said the court had taken note that the accused was not remorseful for the offence.

In another news, an American man identified as Gregory Dow has been sentenced to over 15 years in prison plus a lifetime of supervised release, for engaging in illicit sexual conduct in Kenya.

The United States Department of Justice, the court also ordered Dow, to pay a total of $16,000 in restitution.

Investigation by FBI’s Philadelphia Field office with assistance from Kenyan authorities and local law enforcement in Lancaster County revealed that the 61-year old Dow travelled to Kenya in 2008 to start an orphanage with his wife.

Dow while still maintaining close ties with the US sexually abused the children at the orphanage called Dow Family Children’s Home on multiple occasions.

His wife was accused of being complicit in the abuses.

He abused at least four minor girls between October 2013 and September 2017.