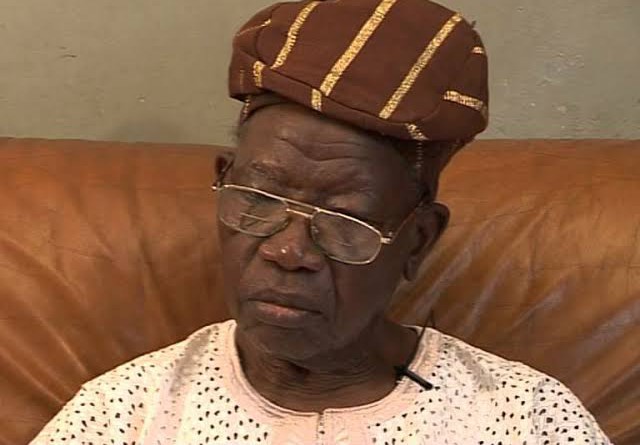 Lagos State governor, Mr Babajide Sanwo-Olu, has reacted to the death of the first civilian governor of the state, Alhaji Lateef Kayode Jakande, describing it as a colossal loss as he would be missed.

Alhaji Jakande, one of the foremost journalists in the country, before becoming governor of Lagos between 1979 and 1983, died on Thursday at his Ilupeju residence, at the age of 91.

Governor Sanwo-Olu said this on his Twitter handle as he announced the passing of the former governor, noting that Jakande’s record of service as a journalist of repute and a leader of remarkable achievements as governor of Lagos State would remain indelible for generations to come.

“With gratitude to God for a worthy life well spent in the service of Lagos State, Nigeria and humanity, I announce the death of a venerable statesman, outstanding politician, public administrator and the first Civilian Governor of Lagos State, Alhaji Lateef Kayode Jakande.

“Baba Jakande’s record of service as a journalist of repute and a leader of remarkable achievements as governor of Lagos State will remain indelible for generations to come.

“His death is a colossal loss and he will be missed,” Sanwo-Olu said.

The governor, on behalf of the government and good people of Lagos, expressed his sincere and heartfelt condolences to the family, friends and comrades of the former governor and elder statesman, praying God to grant his soul Aljanat Firdaus.

“On behalf of the Government and people of Lagos State, I want to express my sincere and heartfelt condolences to the family, friends and comrades of Baba Jakande.

“May Allah grants him Aljanat Firdaus, Aamin,” the governor said.

In a statement by his Executive Assistant, Hunsu Peter, the former Lagos governor sympathized with the entire family of Jakande and especially his wife, Alhaja Abimbola, whom he said had stood solidly by Baba throughout the period of his later years.

Jakande passed on in the early hours of Thursday at age 91.

Ambode said: “The news of the demise of Baba Jakande came to me as a rude shock. He was ripe at age, but we had hoped he would live to celebrate a centenary. He further stressed that his life symbolised humility, uprightness and honesty. He was an exemplary leader, a perfect gentleman and a man of integrity and character. Lagos will forever be grateful to him for his unparalleled service”.

“When I was in office I always looked forward to his fatherly advice and encouragement. Apart from that was his visible presence at state events, even with his health condition never deterred him from giving his support. This shows how he lived a very humbled and upright life throughout his sojourn here on earth”.

“This is a big loss to Lagosians and Nigerians in general. But we take solace in the fact that he left huge footprints that will remain indelible in the minds of progressive Lagosians,” the former governor said.