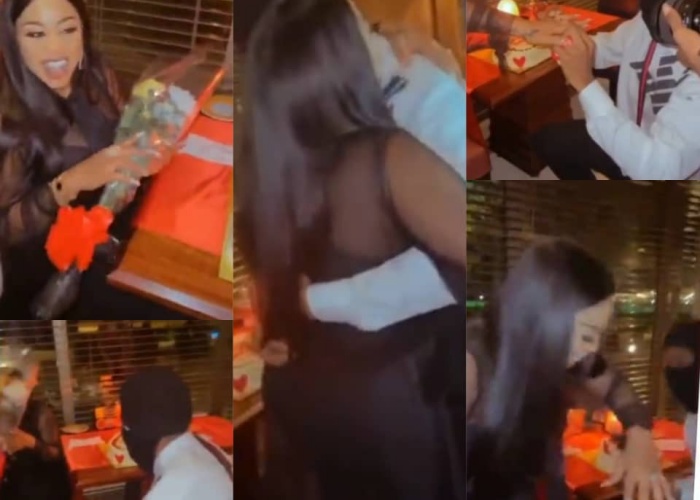 She said she is now officially Mrs Adebayo.

“I WAS SO SURPRISED AND SHOCKED by @segun_wealth and @deeeunknown didn’t know when I Beat him with the flower o me I felt they just brought vals gift o, until I saw uncle on the floor

“BUT I SAID YES  Best Valentine’s Day ever Officially Mrs Adebayo wouldn’t have had it another way ,cause he’s my Best friend and Creative partner,we work so welll together,” she wrote.

Toyin revealed that she was in a relationship with Mr Adebayo on May 30, 2020.

She has never revealed his identity either, as he always wears a mask in her Instagram photos of him.

Toyin in a 2019 Instagram post revealed that she got married at the age of 19 and had her first child at 23.

“A long time ago, a friend sent me a message which I still have, mocking me that I was in an abusive relationship showing off to me that she had a better husband than me, I took my kids and walked away from the relationship, said nothing to the public and focused on my business and kids.

“I had my first kid when I was 23 years old, I got married when I was 19years old, there are many things y’all don’t know about me, I have been through hell and back with no complaints or pity party,” she wrote.