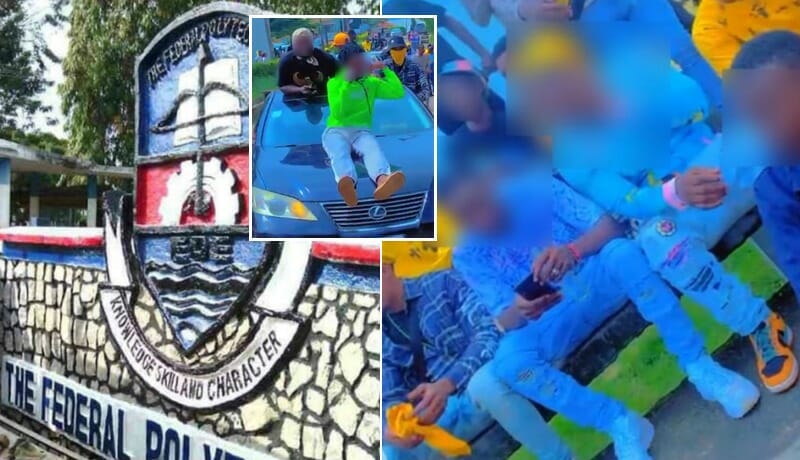 The menace of cultism over the years has eaten deep into the educational system, as more Students are daily initiated into different cult groups across campuses.

Unlike before, cult and cult related activities are now gaining ground in one of Nigeria’s most prestigious Polytechnic, Federal polytechnic Ede in Osun State.

It was disturbing to have watched student-cultists’ demonstration in their uniform ( In touch of yellows), cruising with cars during their last paper in early August in the campus.

The Student-cultists (Alora in yellow) rallied from the school maingate to the school sport complex, where they had their meeting, a gathering celebrating the last paper of their finalist-members.

Worried by the evolving trend of cultism in the school, our Reporter learnt that some student leaders in the school secretly petitioned the management over the cultist-display in the campus.

They appealed to the school management to bring the identified Students to book.

Despite evidences nailing the culprits, the management have chosen silence over action.

A student comrade who spoke under the condition of anonymity expressed regret saying that with the silence of the school management on the cult display, the school which is much known for peace, morals and zero tolerance for cultism may soon be found wanting for probity.

“We have called the attention of the school management to the cultist display, with pictorial evidences and videos, the authorities claimed to be aware of the display and assured to take action but till today the story has been carpeted.

“The management cannot ignore such because they demonstrated right in from of the Administrative building to the school pavilion”.

Another student who didn’t want his name in print said the silence is dangerous and detrimental to the wellbeing of the students community.

He also decried the state of security outside the campus environment, saying that students can be instrumental if cultism is not been checked.

WITHIN NIGERIA Reporter recall that a statement on the heel of the cultist-display in August, the school management had promptly ordered the restriction of student vehicles into the campus – a directive which confirmed the consciousness of the management to the incident. (Order lifted now)

It was learnt that, despite the measures, none of the identified culprits have been summoned by the school panel.

Meanwhile, a source in the citadel confided that the management may have decided to ‘forgive’ the cultists to avoid students protest that could lead to ‘unnecessary disruption of academic calendar’, having witnessed a setback in the calendar due to ASUP crisis.

The source also hinted on how several students who had perpetrated crime have enjoyed ‘mercy’ from the management.

“… Ede Poly that I knew would have pasted their names outside the maingate and that is the end of their education here, the silence is not golden, it is dangerous for not just Students alone but the campus community”, the source added.

According to him “ It is outside of my purview…, but there is nothing of such, you can contact the school PRO” he said.

According to him “ I’m also repeating it now that nothing of such, the campus is calm, we have never witness any form of cultism in our citadel since the inception way back 1992, and it will never happen. It has to do with our age long tradition and motto of the institution, which is ” KNOWLEDGE, SKILL AND CHARACTER. Once again, be rest assured that we have zero tolerance for any form of social vices.”

When asked if the students who were captured during the rally have been pardoned despite evidences, the school spokesman said “It was just a figment of imagination.”

He, however confirmed that no Students was tried for cultism recently “to the best of my knowledge, we have not tried any of our students, the questions of pardoning anyone is out of it” he denied.

Meanwhile, Our Reporter consulted an Educationist in the department of Guidance and Counselling, Obafemi Awolowo University (OAU), Dr. Omoyemiju Michael Adeniyi on the implication of the ‘silence’ on cultism of any educational institution on the Student community.

Omoyemiju said the silence is a threat to Students’ lives on campus, adding that they will not be able to move freely especially in the night.

Comparing OAU to other institutions, he said cultists are unpopular in Obafemi Awolowo University, because there have never been room for such.

“In OAU, students move freely in the night because there is nothing to scare them.”

Asked what should be the punishment for cultism in tertiary institution, Omoyemiju said “ OAU is strict and has a way of disciplining cultists, hence no student want to engage in cultism, others institution should emulate.”

“…They get sanctioned, there are standard rules for such act in every institution” he added.

Another Educationist, a senior lecturer in the Department of Guidance and Counselling, University of Ilorin, Dr Muhammed Shuaib asked the implication of the ‘forgiveness’ on the student community said cultism should not be permitted in any institution.

According to him, the security architect of a school is faulty when cultists begin to display publicly.

“Students will live in fear in any institution that grant ‘pardon’ to cultists, it is clearly stated in student handbook, the punishment is expulsion” he said.

2023: I'm not contesting to become a wrestler –Tinubu opens up on being sick