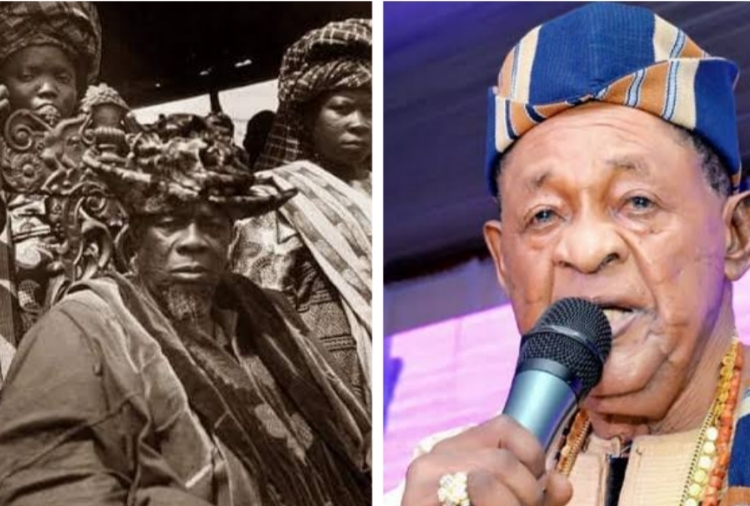 Death has no preference. It does not strike alone. Sorrow, tears and pains are the relatives of death. They walk together and drive out joy in any home they plan to strike. Whenever they are ready to strike, they do so effortlessly. Death and his fellows strike regardless of color, tribe, status or age.

Lamidi Adeyemi Olayiwola was arguably the direct son of sickness and death (Omo Aarun ati Iku), yet died of malaria. Death took Alaafin of Oyo away and made his beautiful wives’ widows. Truly, death has no relation it can not take away. Alaafin of Oyo, Oba Lamidi Olayiwola Atanda Adeyemi is gone. He died at the age of 83.

Besides the gap or difference in the ruling years, there are similarities between the duo. A careful observation into histories of father and son shows that both wrestled with power but came out differently.

Like his father, late Raji Adeniran who was deposed by premier of the Western Region, Chief Obafemi Awolowo and sent him on exile with his crown prince for sympathizing with the National Council of Nigerian Citizens (NCNC), Olayiwola Atanda Adeyemi also had issues with Christopher Alao-Akala, former governor of Oyo state (now late) over the installation of Ganiyu Abiboye as Baale of Ago-Oja in Oyo town. WITHIN NIGERIA gathered that Christopher Alao-Akala (now late) installed Ganiyu Abiboye as Baale of Ago-Oja without the consent of late Alaafin of Oyo, Lamidi Olayiwola Adeyemi.

Unlike his father, late Raji Adeniran Adeyemi who was sent on exile for also engaging in conflict with Bode Thomas, deputy leader of Action Group (now late), Olayiwola Atanda Adeyemi escaped the trials of deposition but his influence was wattered down by Christopher Alao-Akala (now late), a former governor of Oyo state. In May 2011, Christopher Alao-Akala (now late) introduced a law which stipulated that the office of chairman of council of obas and chiefs in Oyo state will be rotated between the Alaafin and two others kings in the state. Till date, chairmanship of council of Obas and chiefs in Oyo state remains a rotational one between Alaafin of Oyo, Olubadan of Ibadan and Soun of Ogbomosho. It was a major blow.

Late Lamidi Olayiwola Adeyemi was no doubt a great reservoir of cultural knowledge. He was deeply connected to traditions. As a practising Muslim, he did not allow his faith to be in conflict with the position he held. He tolerated other faiths, drew a curtain between culture and traditions. Despite all, it is completely impossible for a man to live without flaws or controversies.

When you visit the core Oyo towns and meet with people, there are several untold tales by victims of land-grabbing who have resolved to keep their sorrows to themselves after many failed attempts to seek justice. As great and talented Alaafin was, he faced many allegations primarily land-grabbing which involves brutality, misuse of power and violence perpetuated by some persons who are die-hard loyalists of the traditional ruler.

Some people opined that late Olayiwola Adeyemi ought to have used his contacts to facilitate more infrastructures to the ancient town. They believed that the little or no government presence in the ancient town can be traced to little interest of the paramount ruler in developing the ancient town.

Late Olayiwola Adeyemi can be everything in peoples thought and definition but he was definitely in love with women and education. He was also a true representation of Yoruba’s heritage who did not allow civilisation or exposure to other worlds to run him off. He died as a true Yoruba king who was in absolute love with everything related to Yoruba. Now the paramount king of Yorubas has gone home to meet his ancestors.

According to Wikipedia, Alaafin Adeyemi III was born Lamidi Olayiwola Atanda Adeyemi on 15 October, 1938 into the Alowolodu Royal House, and as a member of the House of Oranmiyan to Raji Adeniran Adeyemi (born 1871-1960), who later became Alaafin in 1945, and Ibironke of Epo-Gingin, who died when he was young.

Atiba’s father, his great-great grandfather, was Alaafin Abiodun and is a direct descendant of Oranmiyan, the founder of the Oyo Empire.

Lamidi Adeyemi succeeded Alaafin Gbadegesin Ladigbolu II in 1970, during the governorship of Colonel Robert Adeyinka Adebayo, after the end of the Nigerian Civil War. In 1975, the head of state General Murtala Ramat Muhammed included Oba Adeyemi in his entourage to the hajj. He was chancellor of Uthman dan Fodiyo University in Sokoto from 1980 to 1992. In 1990, President Ibrahim Babangida appointed him Amir-ul-Hajj in recognition of his commitment to the consolidation of Islam in Nigeria.

He was married to Ayaba Abibat Adeyemi, his senior wife.[8] He attended most events with her or with one of the twelve junior wives that he’s also married to.

He was a lover of boxing, as he was a boxer before ascending the throne of his Fathers.

He died at the Afe Babalola University Teaching Hospital, Ado Ekiti in Ekiti State, at the age of 83, after reports of a brief illness. His reign of 51 years is the longest reign of any Alaafin of Oyo in history.

His death was announced on several major Nigerian news networks on the morning of the next day, where his remains had already been returned to Oyo. His death was the third of a senior monarch in Oyo State within 5 months.