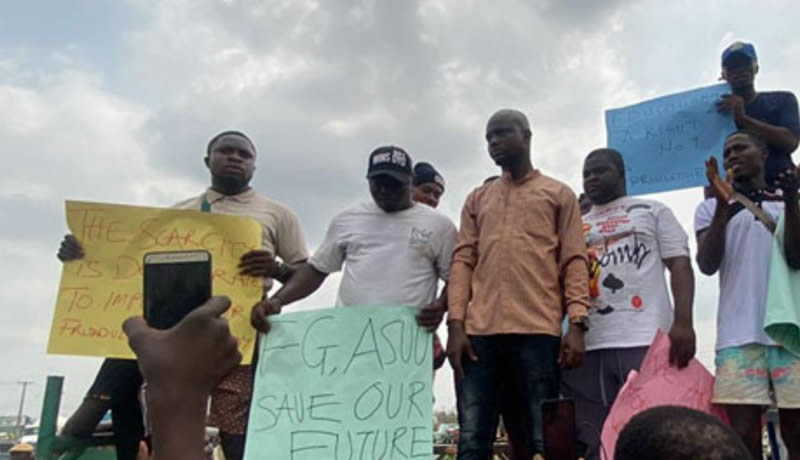 Students are lamenting the continuous closure of public universities. The ASUU strike has lasted for more than 2 months and they are appealing to the union to reopen all schools and allow them return back to the classrooms.

ASUU, On Feb 14, 2022, declared a one-month warning strike following the failure of the Federal Government to implement the famous 7th February 2019 Memorandum of Action (MoA), which contained important highlights of the 2009 ASUU-FGN agreement and aggregated the cardinal arguments of the 2012 and 2013 MoUs and the 2017 MoA.

It also blamed the government for failing to implement the December 2020 MoA which concluded the longest strike in the history of our nation. It however extended the strike for two months after the expiration of the 1-month warning strike.

The strike have lasted 67 days with schools shut and students forced to stay in their houses.

Academic Staff Union of Universities (ASUU) has insisted that the government should first pay the accrued N200 billion revitalization fund for revamping the dilapidated infrastructure in the various institutions before it calls off the strike or engage in further negotiations.

The President of ASUU, Prof. Emmanuel Osodeke, argued that the May 2021 agreement is still sacrosanct and should be implemented for sanity to return to the tertiary institutions. It stressed that the Federal Government has ignored ASUU’s call for full implementation of the draft renegotiated 2009 ASUU-FGN Agreement submitted by the Prof. Munzali Committee in May 2021.

However, Minister of Labour and Employment, Senator Chris Ngige, who stated the government’s position at a recent function in Abuja, said the renegotiation of conditions of service of the university lecturers, must be guided by the International Labour Organisation (ILO) principle of ability to pay.

ASUU and FG have equally disagreed over the payment platform for lecturers in Nigerian universities. In 2020 ASUU embarked on strike action following the decision of the Federal Government to enroll all university lecturers on the IPPIS platform. ASUU had also presented UTAS as a payment platform which it said was developed to ensure smooth payment of salaries for lecturers.

The Minister of Labour and Employment, Chris Ngige, during the negotiations, had said the government would look into the deployment of the UTAS by handing it over to NITDA for assessments.

However, in March, the National Information Technology Development Agency (NITDA), a government agency involved in creating a framework for the planning, research, development, standardization, application, coordination, monitoring, evaluation, and regulation of Information Technology practices in Nigeria said that the UTAS failed to fully pass certain testing and quality assurance requirements.

The Director-General of NITDA, Kashifu Inuwa, in an interview with State House correspondents in Abuja, stated that UTAS failed the integrity test.

“ For me, I’d say ASUU has a just cause for the strike. Unfortunately, irrespective of how good their reasons are, they are really delaying the progress of Nigerian youths. What ASUU is fighting for is not just for now, but for the future of our educational system. ASUU should reopen all schools because the prolonged strike is delaying students’ academic progress.” he said

Ruth Ighomrore, a 300 level student at the University of Benin (UNIBEN) said ASUU should reopen all schools because students are beginning to lose interest in learning.

“This strike is really affecting people mentally, psychologically, and emotionally. A lot of students are losing interest in Learning. First, it was COVID and now Strike, It’s just prolonging the number of years one has to spend in school and I’m gradually getting uninterested in reading and writing exams. ASUU should reopen schools” she said

Ifedolapo Babatunde, a student of the Federal University of Oye Ekiti (FUOYE), appeals to ASUU and the federal government to put the students into consideration.

“I’m not just tired of the house, but Asuu is just prolonging our (students) future, causing unnecessary delay and tampering with our plans. I have things I want to achieve at different stages of my life but they keep disrupting my plans. Please, they should think about our future and just call off the strike.” She said

Bamise Temidayo, a 400 level student at Ekiti state university urges ASUU to call off the strike

Sikiru Sulaiman, a microbiology student at the University of Ilorin, appealed to the Academic staff union of University (ASUU), to consider the future of students even when the Government is beating the drum of Negligence.

“ This strike has negative effects on students. Whenever the union embarks on strike, it weakens the strength of students’ brains and obstructs Academic exposure. Some of the students virtually entered into a marriage because of the strike. The Academic staff union of University (ASUU), should consider the future of the students even when the Government is beating the drum of Negligence.” he said

Oshinaike Oluwafunmilola, a 200 level student at Olabisi Onabanjo University (OOU) pleaded with ASUU to rescind its decision on the ongoing strike. She said she’s tired of staying at home as there is a lot to be covered in school

“This is from the depth of my heart, I want to urge Asuu to please rescind its decision on the ongoing strike. I personally, I’m tired of staying at home as there are lots to be covered in school,” she said

Another student of the Federal University of Oye Ekiti (FUOYE) Abel Jimmy, said there is a need for ASUU to call off the strike because students are not getting any younger.

“Aside from wasting our time, students will end up being rushed to make up for the lost time which mostly leads to failure of students. ASUU should please call off the strike to avoid massive failure once the school resumes”, he said.

Another student of Obafemi Awolowo University (OAU), Boluwatife Ojo, said the strike has encouraged youths to engage in cybercrime and money ritual

“So painful that the issue of strikes has now turned into regular and yearly activities in Nigeria’s educational system. The strike has led youths to vices and all forms of criminality, student takes advantage of not being engaged with their academics to the extra mile and engage in cybercrime and money ritual.”

“ As a student, we can only ventilate our anger, displeasure, but we do not have the capacity, power, wherewithal to instruct or call our lecturers back to classes, however, we can only appeal to them, to passionately consider the interest of the generality of Nigerian student and for the sake of student who has been languishing or derive interest, happiness in vices to return to classes, also find better alternatives this issue can be resolved without student been put at the receiving end of the whole issues.”

“ We also use this medium to call the attention of the Federal Government to do the needful so as to ensure a smooth academic calendar for Nigerian students, other than delaying them, unnecessary because of their actions and inactions on Nigeria educational system. Government should also find a lasting solution to ASUU strike or any industrial action that might be embarked on by university staff so as to avert any future occurrence(s)” he said

For Olawale Rahman, a 300 level History and strategic studies student at the University of Lagos (UNILAG) learning among students has reduced because of the ASUU strike and has equally led to depression.

“This strike is actually affecting one side more than the other and those that would suffer this most are the students’, apart from affecting the whole country at large, and this is why I think ASUU must rethink and resume.”

“To begin with, the issue of strikes has become something that has rigorously reduced the youth interest in studying and has also affected our educational seriousness which will in one way or the other affect the growth of this country in the future.”

“Moreover, depression has taken its part on the side of the students. Frankly, school is one of the driving tools by which students get away with depression and make do with their plans in life. Now that strike has taken up as a driving tool to put students into a bad state. Many have resulted in drugs and other illicit acts. The Federal government should please settle whatever is between them and ASUU so that we can all go back to the classroom” he said

Babatunde Adedayo, an English Language student at Obafemi Awolowo University (OAU), urged the union to demand their entitlements from the federal government using other means instead of always embarking on strike.

“Those that ought to graduate last year were unable to, due to the industrial action strike. Now, hoping to graduate this year but as it stands now their expectations is yet to unfold, likewise, those in one level or the other can not move forward because no one can say when the strike is going to be over if the two group concern failed to reach an agreement,” he said

Mohammed Halimat-Oyibo, a 400 level Biochemistry student at Ahmadu Bello University, Zaria. Said the strike has made her zeal in school depreciate.

“ For me, students been at home because of the strike is making the school zeal in us depreciate, it disrupts our plans and makes us feel there’s no importance of schooling anymore,” she said

Ajadi Joshua, a 300 level Law student at the University of Ibadan (UI), urges ASUU to reopen schools because the strike has affected students’ years of graduation.

Oshoniyi Mofiyinfoluwa Aderonke, a 400 level Human kinetics and Health Education at Ekiti state university (EKSU) expressed worries over the inability of secondary school graduates to proceed with their academics because of the ASUU strike.

“It’s two months now, secondary school graduates can’t progress with their studies even if they pass Jamb except they go to polytechnic or private schools. Personally this strike is not in favour at all, I should graduate by June or so but I’m stuck here. It’s slowing my plans. I thought I had paid my last house rent since March 2021 but I have no choice but to renew my rent again.”

“Students have plans when they want to graduate and what to do after but it’s all messed up with this recurring Strike, besides it’s not helping us academically. Personally, I can’t remember my course code anymore. It might sound funny but some students can’t remember their matriculation numbers” she said.