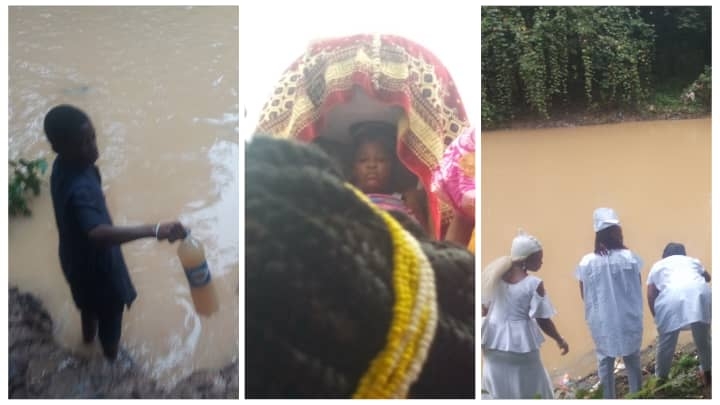 River Osun which housed the ‘Goddess of fertility’ has been polluted as a result of gold mining activities ongoing in some communities in Ijesaland.

Besides turning from ‘colorless’ to yellowish color, there are presence of heavy metals such as mercury, lead and cyanide from activities of the illegal and unregulated licensed gold miners operating in Osun State which can lead to poisoning if consumed.

Investigation also revealed that the inability of gold miners to carefully discharge ‘used waters’ or engage in water treatment after their activities has not helped the situation too.

When the Osun State Government through its health commissioner, Dr Rafiu Isamotu in an interview on Thursday, August 11 cautioned tourists, guests and worshippers of Osun goddess not to drink her ‘sacred water’ due to contamination, WITHIN NIGERIA projected three things to likely occur; temporal suspension of Osun Osogbo festival, reduced participation or massive celebration i.e. worshippers, tourists would ignore warnings of the government and see it as a threat.

WITHIN NIGERIA embarked on a journey to Osogbo, the capital of Osun State where the annual festival is slated to hold. When this reporter got to the palace as at 9:00 a.m., it was full to the brim.

People mostly women and children were anxiously watching for ‘Arugba – Virgin lady’ to come out with the ‘sacred calabash’ and lead the procession to the ‘sacred grove’ where the ‘Goddess of fertility’ resides.

Tourists, worshippers and priestesses dressed in adorned cultural clothes were seen in front of the Osun shrine in the palace. Some were busy glorifying the River Goddess through melodious songs while others were taking pictures joyously. They came prepared to take the long walk with ‘Arugba – Virgin lady’ to the sacred grove.

A visit to the Sacred Grove

Some Osun worshippers were seen standing in front of big collection of 5-litre kegs meant to be sold for any interested buyer. There were persons mostly women selling bottles to interested buyers while people eat, dance and gist at every junction leading to the grove.

When this reporter got to the grove, it was indeed sacred. Besides the appreciable natural presence of bushes which makes it densed, there were also reasonable number of beautifully made art designs such as wood and stone craved ones everywhere.

The sacred grove is no doubt a cultural endowment centre which captured the very essence of traditions and beautifully made it worthy.

Recall that the Osun State Commissioner for Health, Dr. Rafiu Isamotu cautioned worshippers, guests not to drink from River Osun.

According to Isamotu, River Osun is heavily contaminated with mercury, lead and cyanide from activities of the illegal and unregulated licensed gold miners operating in the state.

Despite the warning which was issued on the eve of the festival, a lot of people mostly women were seen holding bottles already filled with Osun water when this reporter visited the grove.

Some women came to fetch the water with 25 litres of kegs while some people brought small buses known as ‘Korope’ to pack their large bottles already filled with Osun water.

This reporter also gathered that those who could not enter the grove due to certain challenges paid some young boys to fetch the water.

At the entrance of Osun Sacred Grove

The entrance of the grove was quite entertaining and interesting. This reporter watched persons regardless of color, age or religion entering the sacred grove with bottles. Some people came with digital phones and camera to capture wonderful moments.

People were seen at every corner rejoicing and soliciting for help from the Goddess of fertility. From Ede to Ikorodu to Abeokuta to Benin Republic to Brazil to United States, WITHIN NIGERIA captured how people from diverse backgrounds trooped into the grove to worship the River Goddess and fetch Osun water.

At the abode of River Osun Goddess

At the abode lies two entrances. One can pass through one entrance barefooted while the other can be accessed with footwear.

Barely 10 metres after the entrance, some people were seen worshipping other Yoruba gods such as Ogun among others while others sat down with some women probably seeking the knowledge of the unknown.

As this reporter emptied the stairs, a statue dressed in white erected beside a big tree was a point of focus. At the base of this statue were priestesses dressed in white singing praises of the ‘rare and powerful spirit’ residing in the waters.

These women would sing the Goddess praises and whenever they noticed a perceived change in the movement of the water, they would shout in unison.

Worshippers mostly women looking for babies struggle to touch number of baby dolls which was carried on head by another priestess.

THE ARUGBA PROCESSION AND SWITCHING OF CARRIER AT SOME POINTS

Arugba also known as ‘calabash carrier’ is a virgin lady who is responsible for carrying the sacred calabash containing sacrificial materials to River Osun. She must be a virgin and must share same ruling house with the current king. This sacred calabash is believed to have been handed over to Osogbo ancestors by the River Goddess with a direct instruction that it must be carried to the grove every year by a royal virgin lady. This year was not different too.

As Arugba walked out from the shrine heavily guarded by Osun priests, security agents and whip boys, she firstly walked down the left side of the palace and later walked to the right side, facing the building that housed the king and his traditional chiefs before she finally moved out of the palace. As she led the procession to the sacred grove where River Goddess resides, the people cast their problems on her, pray for wealth and good health.

When asked, a priestess told WITHIN NIGERIA that Arugba is the representative of River Osun Goddess and she must be guarded till she arrives the grove because if she falls or hits her foot on stone, it is a bad omen.

In the course of leading the procession, the ‘Arugba’ branched some areas like residence of Olori Awo of Osogbo where she was rewarded with cash gifts and kolanuts.

However, at a particular point, this reporter noticed that a red cloth was used to cover the scene where an elderly man replaced the Arugba, carried the calabash and covered a little distance while the Arugba held him closely before it was later switched. They prevented photographers from capturing this particular moment but some actually did including this reporter.

The ‘Arugba – royal virgin lady’ carried the sacred calabash from the spot till the abode of the River Goddess.

The link between ARUGBA, Ataoja of Osogbo and River Osun Goddess

When the Arugba alongside Osun priestesses and whip boys got to the sacred grove, the Ataoja of Osogbo, Oba Jimoh Olanipekun received the sacred calabash from the Arugba and sat on a stone throne in a special location in the grove.

This special location is believed to be the first palace situated on the grove before the goddess asked the first dwellers to move a far. A priestess told WITHIN NIGERIA that the stone throne is the same throne the first Ataoja of Osogbo, Olarooye sat on when he was to offer the first sacrifice to the goddess during the settlement of Osogbo as a town.

The Ataoja of Osogbo, Oba Jimoh Olanipekun communed with the goddess and prayed for protection and prosperity of the town. The monarch then fed the goddess with sacrificial materials inside the sacred calabash. The feeding of the goddess by the monarch is the final rite.

Immediately the monarch stood up, the shouts of Ore Yeye Osun rented the air. People sang, danced as hunters present were shooting sporadically into the thin air too. Despite the warnings, people struggled to drink the river, fetch into containers of different sizes while some washed their faces. As people rejoice, Osun priestesses including whip boys and security agents led the Arugba back to Osun shrine which is situated in the palace. As the Arugba stepped out, the cloud became heavier but it did not rain. At the end of the exercise, there was little precipitation and the Arugba was carefully rushed into the shrine by Osun priests after she got back to the palace.

From Cure to Disease

River Osun which is widely known and accepted to contain spiritual powers that can heal incurable diseases and give barren women wonderful kids has suddenly become a source of disease such as poisoning as a result of heavy metals it contained owing to mining activities ongoing in some communities in Ijesaland.

Despite these noticeable changes, the worshippers and custodians stormed the sacred grove to worship the goddess, drank the water and fetched in large quantity.

Some worshippers including guests expressed their concern over the noticeable changes in River Osun. Even though they still believe in the potency of the water, those who spoke with WITHIN NIGERIA expressed their worry about the yellowish color of the water and presence of heavy metals that can cause poisoning.

A worshipper simply identified as Osungbemi told WITHIN NIGERIA that she felt discouraged when she saw the color of the water but had to proceed to fetch it because the color can not affect the spiritual powers.

Another worshipper identified as Rukayat expressed her grievances about the condition of the water, accusing the government of allowing gold miners to contaminate the water through their activities.

Rukayat, a resident of Ikorodu told WITHIN NIGERIA that the government has identified the source of the problem which is gold mining activities but they only want us to stop worshipping our mother, Yeye Osun not solving this problem.

While expressing her disappointment in the government for directing people not to drink the water, Rukayat said it is the responsibility of the government to stop the contamination not the people.

‘The water has spiritual powers to heal all kind of diseases. It has powers to make infertile women get pregnant. It has been tested before and it is still working. Government should stop the contamination not the people’, she added.

Sodiq Lawal Chocomilo, a journalist with WITHIN NIGERIA writes from Osogbo, the capital of Osun State