If Adeleke dances around gold mining, Osun will descend into complete anarchy 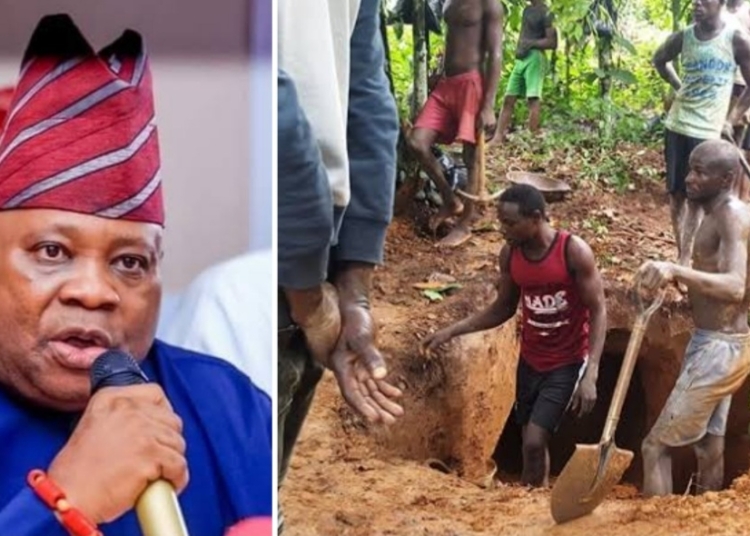 This isn’t a prediction. This projection shouldn’t come true. Every single soul in the state must rise up against invaders and agents of self-destruction if it doesn’t happen. The living spring is in a condition of utter ruin, and the process of self-destruction has started in the Osun East Senatorial District.

The state’s gold mining industry is no longer dangerous. Already, the harm is getting worse. The immediate consequences of unchecked mining are horrifyingly startling, and the damage done thus far is beyond repair.

The cries of the inhabitants of the host villages are deafening, and the forces in charge of ensuring their safety are either at a loss for words or possess the power of a man but the resolve of a helpless little girl.

You would understand the misgivings of folks who have expressed concerns about it once you saw the scope of the devastation and how irreparable it is. The extent of environmental deterioration or harm is horrifying.

Will Adeleke be able to prevent the $106m Ilesa water project from failing like the mini-water schemes?

On farmlands, they create large holes that they then abandon without filling them in or installing warning signs. They occasionally mine gold deposits, causing local water sources to become contaminated.

They utilize recklessly and carelessly, contaminating or polluting nearby water sources. For the residents that depend heavily on flowing water, they do not offer alternative sources of drinking and excellent water.

Sadly, the majority of mining operations take place in rural areas where the majority of residents depend on farming for their livelihood. In addition to making farmers poorer, these gold miners have also rendered numerous farmlands worthless. Gold is now being exploited mercilessly.

As long as they acquire gold, they don’t care about environmental harm, water body contamination, or anything else. They are actively digging mines throughout the entire Ife/Ijesa zone, but fortunately, those who should be raising concerns have already consumed the remaining porridge that their invaders cooked.

A resident of Itagunmodi, one of the host communities for gold discoveries, and I recently had the opportunity to talk about this subject of gold mining. Due to the actions of gold miners, this specific village has experienced severe environmental harm.

The sad history of this resident, however, is akin to that of the citizens of Iregun-Ijesa, Ife, Iperindo, Odo-Ijesa, and other locations who were horrified by gold exploitation.

For a start, gold miners would purchase a piece of virgin land, but as mining progressed, they found themselves expanding into adjacent regions. For safety or to frighten off resentful people in order to start the mining operation, they typically arrive at night with their heavy weapons, machine tools, and ammunition.

They are aware that the public would be forced to let them finish what they began. Bitter complaints from these locals included the presence of large holes that were either concealed in leaves or forests or that the water was contaminated.

Why are gold deposits present a curse? Why is Osun in such bad luck? Why do the local populations of the host communities for gold discoveries suffer so greatly? Will these atrocities ever be forgotten in our lands? Can this scenario be saved by taking vital moves in the correct direction? Who will start these constructive initiatives?

I regret to say that I am unable to provide direct answers to these queries; nonetheless, traditional leaders of the impacted communities should. Ademola Adeleke, the governor, should be prepared to look into any kings who served as these miners’ errand boys or those who established businesses like this to further devastate their lands and populations.

No time is more appropriate for the newly elected governor to be reminded that the election is done. The task of governance should be the new sheriff’s first priority. He ought to pay more than just financial attention to mining. He should pay greater attention to how the environment is being destroyed and rein in the miners’ excesses who have vowed to ruin the people and state.

Security is as vital to environmental harm or water poisoning. Alarming is the influx of foreigners, many of whom are from the country’s north. When they sell farms for a low price, the owners fall for their tricks. Farmlands containing cocoa, kola nuts, and other crops on several acres were devastated. We recklessly lose meals in our search for riches.

The fact that these invaders have sought refuge in some traditional kings’ palaces disturbs me. To force resentful landowners to comply with their demands, they approach some royal fathers. These monarchs’ numbers are multiplied by this new coalition, but the populations they represent suffer even greater loss and harm.

While some traditional rulers are really incapable, others have given up on their palaces and homes in favor of motels. Now they go around in expensive cars, to the disadvantage of their starving and fearful people. These fugitive rulers lack empathy and compassion. They don’t worry about the effects of gold mining on security because money keeps flowing into their accounts.

The state of living spring in Osun is following the same course as Zamfara, which buried its tranquility. Young males now enter the state carelessly and without a trace in order to mine. They occasionally arrive armed and prepared to defend themselves from robbers or angry neighbors who could want retribution, slowly amassing lethal weapons for the state.

Unfortunately, there is not a single host community that can take pride in a functioning security system. Police stations with two or three officers and little to no equipment are located across these areas. Any war that emanates from these neighborhoods would result in enormous human casualties, thus the government must rise and move more quickly.

In the host towns, hospitals and schools are in bad shape. The majority of schools are plagued by broken flooring, seats, and tables, as well as leaking roofs. They put the residents of these towns in danger while also leaving them in a dejected mood.

It is necessary to stop the reckless exploitation of gold reserves. In addition to experiencing the negative effects of mining operations, residents in host towns should also gain from them. In host communities, security institutions should be bolstered and individuals should receive top-notch care. Osun might avoid being a destroyed state if these crucial actions are implemented.