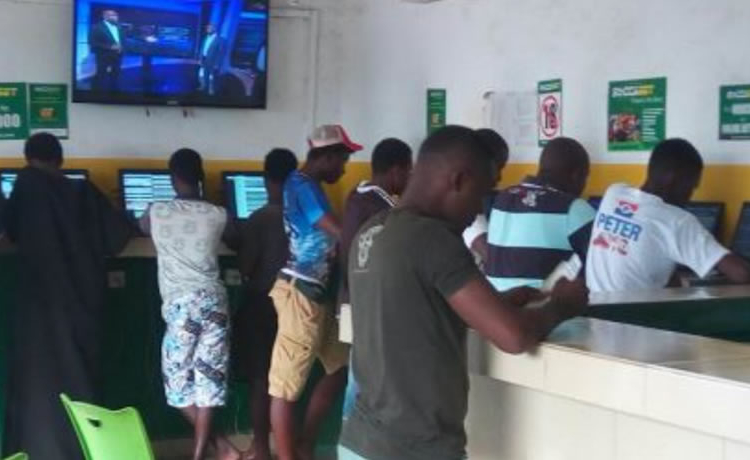 Growing rate of unemployment has really made things worse for common Nigerians. Inflation is on the rise, resulting to mass hunger and increasing poverty index. Poor pay incentives and wages have not helped matter too.

Some unemployed youths see ‘betting shops’ as offices while the employed ones who receive poor pay incentives take ‘betting’ as an alternative source of income to meet up scary expenses caused by inflation.

Betting is not only a means of livelihood. It is a game of strategy, prediction and luck. It can make or mar. It remains the fastest way to become rich, poor, richer and poorer.

Through betting, a sizeable number of young Nigerians have become millionaires while several others who were probably unlucky with predictions became poorer.

In our pursuit to make findings about how ‘sports bettings made young Nigerians poorer’, WITHIN NIGERIA visited selected betting shop in Osun communities to monitor, gather information and mostly interact with young people who bet for survival.

On a Monday morning, this reporter visited one of the popular betting shops in Osun State.

This betting shop, an attached building with a single door and two windows situated infront of a filling station is divided into two unequal parts with plywood.

The larger part has benches, plastic chairs and two big Plasma TVs for customers while the smaller part has two monitors, a chair and small wooden shelf for the bookie – a young man in his early thirties.

A bookie is someone who facilitates gambling by setting odds, accepting and placing bets, and then paying out the winnings. It’s short for the term bookmaker.

The larger part is divided into three sections. The virtual section – where people watch football games to win or lose money instantly.

When this reporter entered the building, he counted ten people mostly young people infront of the building and other eight inside the building who did not look happy. These eight people were seen cross-checking tickets with predictions on screens.

Truly, life can be harsh and unfair at times. While others looked sad and frustrated, four people came with their tickets to secure funds over successful predictions.

This reporter sat on one of the wooden benches, fixed his gaze on the floor and noticed a sizeable number of squeezed tickets of failed prediction of football games.

This reporter stood up and walked towards the betting section to predict some games purposely done to divert attention. What’s the least amount to play? this reporter innocently asked.

‘Fifty Naira (N50) but I will advise you put in more money to win big. You can only win big with fifty Naira if you pick many games which would reduce your chances of winning’, the bookie advised with a firm look.

This reporter asked the bookie to assist him in selecting games and handed over the sum of N500 to him. The bookie picked five (5) matches and names of football teams he selected were strange to this reporter.

By 5pm, we will know the fate of your ticket but be rest assured. I only picked five games for you, the bookie added.

This reporter came back around 5:20pm to know his fate as claimed by the bookie. Two out of the five matches ruined the ticket. He asked this reporter to give it another trial.

The minimum amount to bet here is N150, says the bookie as this reporter hands over N100 note to him. And the reporter staged a walk-away.

An encounter with ‘Virtual wizard’

When this reporter walked to the virtual screen, he saw four men probably in their late twenties who fixed their gaze on the screen. Within three minutes, the result popped on the screen. They squeezed their tickets and played again.

While watching the terrible loss of money people go through to achieve more, a young man in his early twenties who identified himself as ‘virtual wizard’ pat my shoulder and asked me to give it a trial with assurance of winning.

This reporter gave the virtual wizard the sum of N500. His first attempt was not successful because Newcastle and Liverpool played draw. Two games ruined the second ticket and the last one he played with N150 was brutal. He lost all games. He felt so disappointed.

‘We will continue tomorrow. We’ve lost too much already for today, says this reporter before the virtual wizard would request for more money. He left the betting shop possibly to look for money.
From little to nothing

Kayode while explaining his terrible situation told this reporter that he works as a laborer and earns 2,000 per day which does not settle my bills.

‘My friends introduced me to sports betting barely a year ago. Whenever I leave work, I will try to pick some games with the hope that I will win but I lose mostly’.

Sadly, I’ve only won little money which I ended up losing after playing. I’ve lost a fortune, a rather sad Kayode said.

He added that he recently lost N1000 and a single match spoilt it.

Another 23-year-old man fondly called Beejay told WITHIN NIGERIA that he can not leave sports betting eventhough he seldomly wins.
Beejay who works as a fuel attendant disclosed that he earns N12,000 monthly which is not enough to bear his responsibilities.

‘I’m not married but I have a child. He stays with his mother who lives with her parents. I pay tuition fees, buy foodstuffs and sometimes gifts for him. How do I want to survive without additional money?’

Beejay who revealed that sometimes he does not win any game for three weeks and more told WITHIN NIGERIA that the nature of his job deprives him of getting another job as alternative for more money.

‘I’ve found sports betting as a second job. I play it very well. I lost all my money sometimes but I will not relent. I surely know that I will win big one day’, Kayode told this reporter.

When asked whether his financial situation has changed since he started betting, Sharpkid said that he has actually become poorer because whatever he has earned from betting did not match up with what he has lost to it.

I still have hope that I will win big. I really have hope. I have truly lost a lot of money to it but I am not ready to back off, he reaffirmed.

For Samuel Eyebiokin, losing is like a disaster. He told this reporter that he has mastered a mitigating mechanism to put his psychology at check after every loss.

Samuel disclosed that he was lured to sports betting by two friend after years of total abstaince.

While acknowledging that victory is sweet, Samuel revealed that he won his first game and that made him an addict.

‘I’ve also learnt not to use huge money on betting. I also use excess funds to bet. Two games have denied me of winning N40 million before but being a fatalist by orientation, I strongly believe that what is not mine will not be mine. That keeps my psychological wellbeing under check and immune against unnecessary headaches whenever I lose’.

“In fact, I have had scenario where I was to win maybe 500,000 and they brought cashout of about 70,000 after playing with just 500 naira, but because the game that is left for me to get to 500k is like 3 to 4 games, I decided not to take the 70k and a game later cut the ticket, as usual, instead of blaming myself or regretting, I always use fate mechanism to maintain my sanity, I would simply say, que sera sera”, he added.

When this reporter left Samuel, he went back to the building and sat down to watch a rematch for a while.

A man probably in his early forties won a virtual game with potential winning of N3850. He gave N200 note each to two people and handed over N300 note to the bikeman sitting beside me.
The bike man could not hold his excitement. He disclosed that he had lost almost N1500 to sports betting.

“My plan was to buy petrol worth N500 and use it to work for some hours because I need to deliver N1500 to the bike owner. I just sat down here because I do not know whom to ask for help”, says a rather sad bikeman as he stood up and walked towards his bike.

Allow me to add N1000 to the N300 for you to be able to buy sufficient petrol that would allow you to work for a while. You must not go back home to meet your family with emptiness, says this reporter as he pulled out the sum of N1000 note and gave it to the bikeman.

He thanked this reporter profusely and he was very excited too.

As this reporter walks away from the betting shop, the memory of the bikeman whose story is not different from others who work so hard to earn a living and allow sports betting to make them poorer continues to linger.