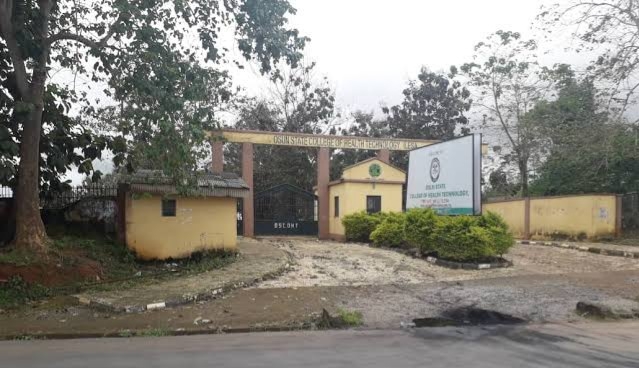 This reporter visited Osun State College of Health Technology, one of the state’s tertiary institutions, to interview some students about their welfare, living conditions, and how they have been surviving the tough economy with effects on their academics, as campuses resume full activities following a brief break from the festive periods—Christmas and New Year, respectively.

On January 9, when this reporter arrived at the college’s entrance, he made his way down the unpaved and dusty paths that led to the classrooms and laboratories. The history of this college is unique compared to other campuses with short tarmac roads. No tarred roads exist, and massive dust storms have left their mark on nearby walls, parked automobiles, and other objects outside of classrooms.

Only a small number of pupils had resumed academic activity, this reporter noticed, aside from classrooms with damaged windows and few tables and chairs. The majority of students, mainly freshmen, are likely at the administration building to complete their entrance, according to information received by WITHIN NIGERIA, while other students (stallites) have not fully resumed.

During our tour to the campus, some students spoke with people WITHIN NIGERIA. They described their interactions and exchanged stories about financial difficulties. They bemoaned the high cost of living, including rent. Some students admitted that they ran side companies to get by in the country’s difficult economic climate.

During a brief visit to the college, a student from the Health Assistant Department who only went by the name Ife complained about the uncomfortable chairs and tables in the classes.
Ife, who was protesting about the admissions procedure, claimed that the college admitted more students than it could handle, forcing students to learn in challenging circumstances.

My class has more than 100 pupils, and the furniture we have does not comfortably accommodate all students. Ife continued, “If you arrive really early, there is a chance that you either sit at the edge or if you can’t stand up for hours.”

Samuel, a Medical Laboratory Technology student, is concerned about the school’s poor road system and the quality of its unfinished public restrooms, which are currently inoperable.
Samuel claims that students continue to relieve themselves in bushes, and our roads’ conditions deteriorate as a result of abandonment.

Additionally, the 21-year-old student asserted that while everyone wears white, the unpaved roads’ dust makes it dirtier.

In a separate interview with WITHIN NIGERIA, a Health Information Management student who went by the name Ade lamented the nation’s economic state and described the struggles he had before being able to pay his tuition.

I have unpaid rent. After selling some household things, I’ve now paid my school expenses. My father makes a pitiful amount of money, and the business we relied on did not prosper as anticipated. The company owned by my mum is also failing. We spend all of our income on food, he said with bitterness.

The student from the HIM department informed the reporter that he wants to run profitable side companies to fund his academic endeavors but lacks the resources to do so.

Ade, who brags about the attitude of resilience he says he got from his father, emphasized that he is not prepared to fail.

Our family does not experience fatigue. Hard times never last very long for us. I am willing to take any legal action to obtain money. I’ll get my degree, the young man, frustrated yet hopeful, said.

Esther, a different student from the department of Community Health is concerned about hunger and how she plans to manage her time throughout the semester.

The 23-year-old woman admitted that she is having a really tough time feeding herself and noted that occasionally she sleeps without eating.

I received three Kongos of rice, a tuber of yam, two Kongos of rice, and one Kongo each of beans when I left my house in November. I couldn’t afford the transportation fare, so I didn’t travel home for Christmas. In fact, she declared, I would rather keep the fare to eat than travel.

While criticizing immoral behavior, Esther admitted to having acquaintances who dated older men and Yahoo Boys in order to survive, but she would never do that herself because she was raised in a godly Christian environment.

I refuse to consume their food because I don’t want to split the spoils with them. Despite my sermons, they disregarded God’s words. They haven’t changed, in my opinion, because they don’t perceive any viable alternatives. A fairly dejected woman said, “I’m not lazy either, but I haven’t found a job that would still let me go to classes.”

Oluwaseun, another student from Community Health (Junior) was counting the handouts she had purchased for this semester when the reporter approached her. “I purchased eight (8) of the twenty-five” (25).

A visibly dejected Seun informed WITHIN NIGERIA, “Each for N500.”

While praising their attempts to meet her requirements, Seun remarked the greatest way to show your appreciation for them is to achieve excellent grades and test scores.

The road system is pretty poor. There is not enough furniture. To sit, write, and learn, we cram ourselves. The setting is by no means favorable. We make a plea to the government and college administration to address the furnishings issues, she said.