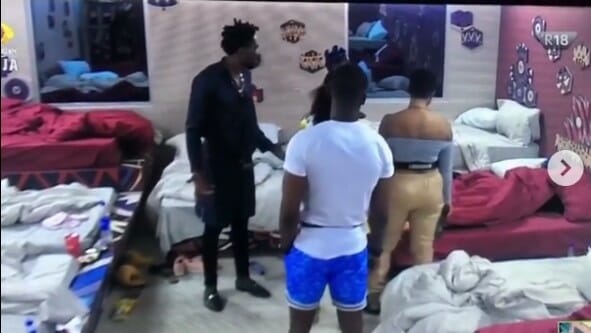 BBNaija 2021: Drama As Boma Blasts Maria For Splashing Her Food On His Shirt [VIDEO]

The Big Brother Naija house this morning has kicked off to an exciting start as viewers who love the ‘violence’ part of the show have something to talk about.

Before Maria got out of bed this morning, the remaining housemates have been talking about how they can stop the continuous pee on toilet seats and floors in the restroom.

Boma, the head of house had suggested he will call a meeting when everyone was awake, which he eventually did, and Maria who just woke up was part of.

Maria, however, went straight to get her food which Whitemoney had prepared for her before she got up from bed.

Then she sat amidst other housemates at the dining eating her meal while Boma kicked off the meeting.

Along the line while the meeting went on, Maria stood up and yelled the words amongst the housemates, ‘You guys are so annoying!’ then she went ahead to dispose of her food, went back to the room and laid on her bed.

This immediately created a confusion in the house as the meeting stalled and some housemates including Boma went straight to meet her in the room to know why she acted that way.

While on the other hand, some housemates protested against her actions stating she was not meant to act that way.