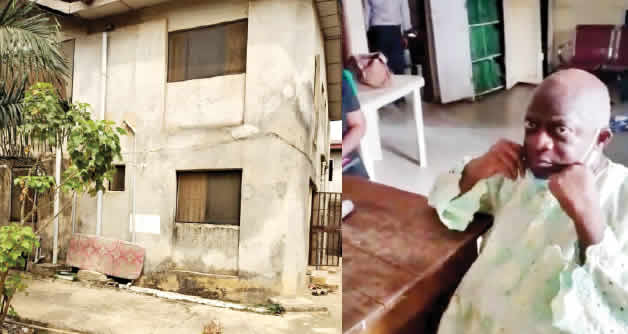 Surajudeen Jaji, a 77-year-old landlord, has been rescued by the police after his children allegedly detained him in a room for more than 12 months at his residence, No. 47 Maria Okor Street, Bucknor area of the Ejigbo Local Council Development Area of Lagos State.

According to a report by Punch Metro the septuagenarian was confined to a room in his house after his children suspected that he was making plans to sell his property.

To prevent Jaji from carrying out his plan, it was learnt that his children allegedly instructed his maid to deprive visitors access to him, but when questions were being asked about Jaji’s whereabouts, the children reportedly claimed that they were keeping him safe from contracting COVID-19.

However, trouble started between Jaji and his family when a maid, identified simply as Adija, was employed to cater for him and his wife, Rashidat, at home.

A few months after Adija was employed, her services were terminated by the children, who suspected that she was having an illicit affair with their father.

A member of the Committee for the Defence of Human Rights, Abdulganiyu Salaudeen, who spoke to PUNCH Metro on Monday, said Jaji’s children and family members alleged that their father started acting weird after Adija was fired.

Bandits abduct mother and her two children in Zamfara

“So, they assaulted the maid, disengaged her and also refused to pay her complete salary. That was the beginning of Mr Jaji’s problem; his children collected all his phones and locked him inside a room in the house. The man was confined to an inner room and whenever they wanted to feed him, they would open the door and give him food.

“I have called two of his children to confirm the situation and their excuse was that their father said he was not the one who gave sired them; so, instead of allowing him to sell his property, they preferred to lock him until he regained his sense as they claimed he was under a spell.”

When contacted, one of Jaji’s children, Titi, said, “We said we don’t want her (Adija’s) services again and I don’t know why she is making false accusations to different people that we locked up our father. Why will we do such a thing to our father and why is Adija particular about our father? Our mum is also staying in the same house.”

When our correspondent demanded to speak with Jaji, Titi said, “There is no need, you will speak with the head of the family.”

Titi connected PUNCH Metro with the head of the family, Aliameen Onashokun, who said Jaji’s phone was seized to prevent him from contacting Adija.

He stated, “It was when we employed Adija that everything scattered. He (Jaji) was not locked up at home; his wife, Rashidat, and a house help are also at home. Adija was asked to go, because she was having an affair with Jaji and cast a spell on him.

“Jaji has disowned his children and wife because of Adija and was saying that he would give his house to her. All the family members agreed that his phone should be seized to prevent him from contacting Adija.”

In a bid to ascertain Jaji’s true state, PUNCH Metro linked Salaudeen with the police, who took them to the house, but when they got there on Tuesday, the entrance door of the house was found locked.

When efforts to get someone inside the house to open the door proved abortive, Salaudeen said, “The police employed the services of a welder, who broke down the door, and when we entered, we met Alhaji Jaji inside the room, his wife was also there alongside a maid.”

Footage made available to PUNCH Metro showed Jaji saying, “I want my freedom, but I want an undertaking that my children will not step into this house until I am dead. They should also take their mother to their place.”

“I don’t know the rationale behind locking their father up for wanting to sell his property. But the Divisional Police Officer is working with the Chairman of the local government council to take the man and his wife to hospital for treatment. Also, we will get across to the children and continue our investigation from there.”