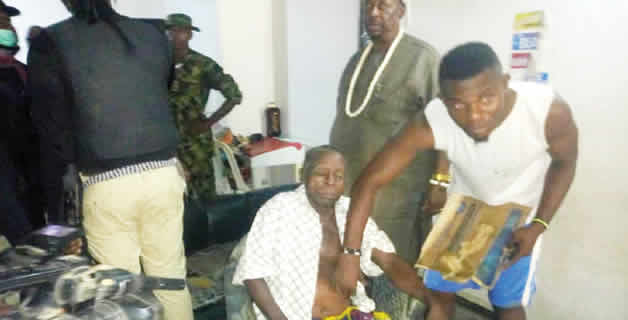 Attempt to kidnap a 81-year-old traditional ruler identified as Muri Stanislaus Eyamba in Calabar was reportedly foiled by personnel of the Operation Akpakwu.

WITHIN NIGERIA learnt that four yet-to-be identified men invaded the Calabar residence of the monarch, who is also the Clan Head of Efut Ifako/Mkpara Ancestral Clan in Odukpani.

According to a source, the men had gone to the Idang/Ambo Street residence of the monarch in Calabar on the pretext of buying chicken and whisked him away to the Edibe Edibe beach.

Report further revealed that the security personnel were alerted and they chased the kidnappers to the creek, where there was an exchange of gun fire, which forced the gunmen to flee and leave the monarch behind.

Speaking with journalists, the grandson of the monarch, John Eyamba stated that the kidnappers came around 8pm on Monday.

“They brought out a gun and pointed it at the Muri, who was sitting close by, and took him into the car they came with and took him away.

“We called the Army and other security operatives and they came, did an investigation and went into the creek.

“The Army team exchanged gunfire with the suspects and they abandoned the monarch at the creek and fled.”

John added that the abductors tried to negotiate with the monarch while he was with them and they were about to take him deeper into the creek when soldiers intervened and rescued him in the early hours of Tuesday.

Confirming the incident, the state Commissioner of Police, Sikiru Akande, said, “I want to thank God for helping us to react swiftly on the rescue of the 81-year-old traditional ruler. Our response is an insight and a tip of the iceberg to the fact that we have started keeping our promise to Cross Riverians.

“We are sending a message to hoodlums and all criminals alike, who want to test our strength or will, that we are not going to relent until they are completely flushed out of the state.

“I want to thank the youth of the community, personnel of the Operation Puff Adder, Operation Akpakwu, the Efut Police Division and most especially, the Marine Police, who took the risk of securing the waterways and ensuring that the hoodlums did not escape through the waterways with their victim.

“Those, who are desperate to cause problem in Cross River, should be rest assured that we will come after them no matter where they hide or how far they run.”

Speaking about the incident, a traditional ruler in the area, Maurice Okon Eyo, condemned the attempted kidnap, but commended the Army and other security agents for responding promptly.

“I thank the law enforcement agents for their quick response, which has succeeded in saving the Muri’s life,” Eyo said.