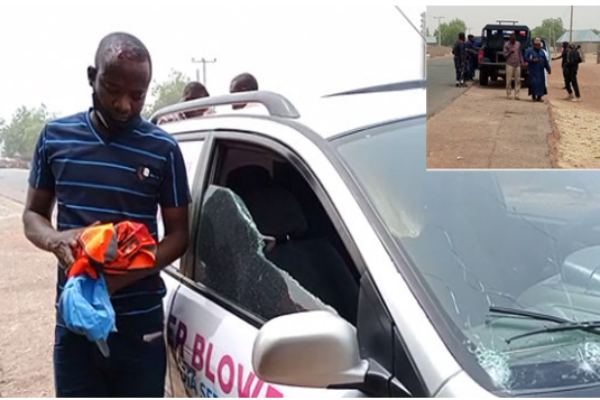 A vehicle conveying journalists to Government Girls Secondary School in Jangebe, Zamfara State where 317 female students were abducted by unknown gunmen was attacked by a mob as confirmed by the police.

It was learnt that the mob who were infuriated with news of the abduction, created roadblocks inside Jangebe town and attacked the vehicle conveying journalists.

Journalists crew from Channels TV, TVC, Daily Trust, News Agency of Nigeria, and Thunder Blowers Multi-Media services were in the vehicle that was attacked.

The angry mob hurled stones at the vehicles and smashed part of the vehicle, causing injury on one of the cameramen who has been identified Babangida Calipha.

The situation at Jangebe community is tensed as residents have mobilised themselves blocking security operatives, journalists, and government officials from getting access to the main town.