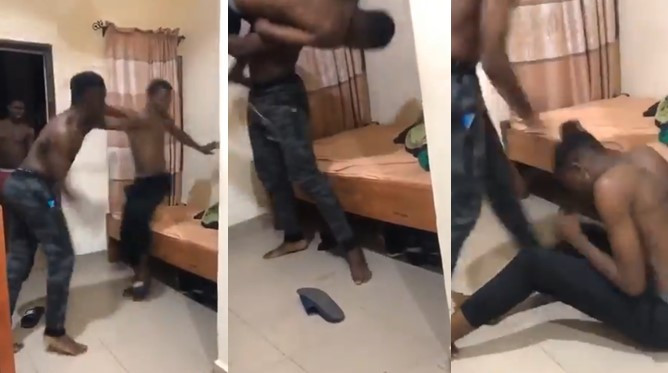 Days after a video of a student assaulting another student over slippers surfaced online, the management of Babcock university has reacted to the viral video.

Recall that there was an outrage on social media over a video of student’s physical assault on his colleague and the two students have not been identified yet.

Speaking on the development, the school’s Director of Marketing and Communications, Joshua Suleiman said in a statement made available to newsmen that the matter has been reported and would be investigated.

“The attention of Babcock University Administration has been dawn to a recent video clip on social media showing a scuffle between two 100-level students of the institution.

“Preliminary investigations revealed that the fight resulted from lack of restraint by a student who alleged his roommate of using his pair of slippers without his permission/consent.

“With our zero tolerance for bullying, and physical violence of any form, the university administration finds this conduct abominable and most unacceptable and is, therefore, taking appropriate steps to address it accordingly.

Ghanaian Airforce personnel stabbed by Naval officer for having sex…

“The university also condemns the conduct of the students who, rather than separating the two students fighting, and or reporting same to the authorities immediately, instead concentrated on video-recording the incident.

“As an institution of conscientiousness, Babcock University will continue to create a safe, as well as upholds its values of mutual respect and peaceful co-existence among our students. We are committed to pursuing our goal to nurture God-fearing leaders for Nigeria and beyond.”