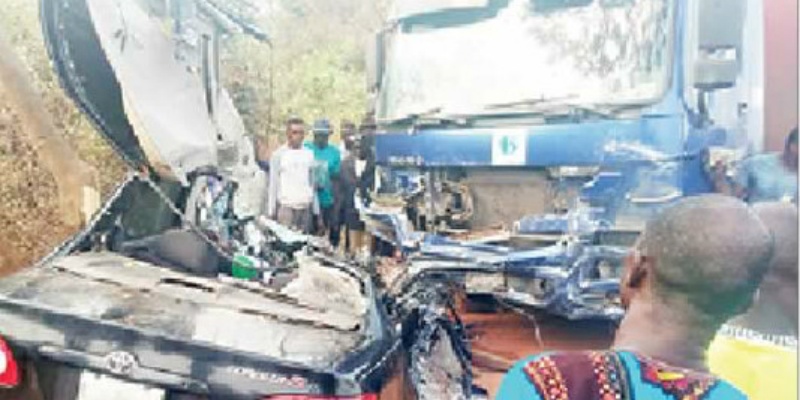 One dead, another injured in Lagos-Ibadan Expressway accident

The Ogun Traffic Compliance and Enforcement Corps (TRACE) on Thursday confirmed the death of one person while one other sustained injury in an accident involving a Truck and Mazda Bus at Aseese, on Lagos-Ibadan Expressway.

Mr Ojuoro Olushola, the Mowe-Ibafo Divisional Commander of TRACE, told the News Agency of Nigeria (NAN) in Ota, Ogun that the accident occurred at about 8:10 am.

Olushola said the accident that involved a Mini Truck with registration number APP-312 XP and a Mazda Bus marked KJA-670 XM was due to speeding and careless driving.

He said the Mazda bus rammed into the truck that was making a U-turn at Aseese, on Lagos-Ibadan Expressway.

“18 passengers were involved in the accident that led to the death of one person, while one other person sustained various degrees of injuries.

“The corpse of the victim has been handed over to the family members while the survivor is receiving treatment at Famobis Hospital,” he said.

He said the vehicles had been towed off the road with the assistance of officials of TRACE, Federal Road Safety Corps, Police and Army to ease the free flow of traffic in the area.

Olushola advised motorists to adhere strictly to all traffic rules and regulations as well as avoid overspeeding to avoid unnecessary loss of lives and property.