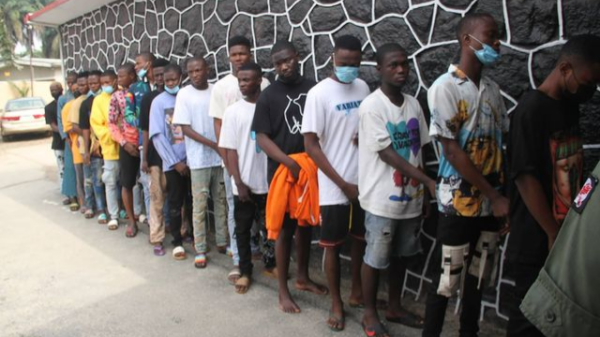 The suspected internet fraudsters were arrested at Remo Majestic Hotel, Shagamu, Ogun State during an operation by Operatives of the EFCC on Wednesday, March 17, 2021.

In other news, WITHIN NIGERIA reported that two men identified as Aremu Ridwan Kunle and Adegboyega Adisa Adebayo were arraigned on Thursday, March 18 by the Economic and Financial Crimes Commission, EFCC before Justice Iyabo Yerima of the Oyo State High Court, sitting in Ibadan.

WITHIN NIGERIA learnt that Aremu was separately charged with eight counts while Adegboyega was docked on a two-count charge.

According to the charge sheet, their charges border on obtaining money under false pretence contrary to Section 1(2) of the Advance Fee Fraud and Other Fraud Related Offences Act, 2006 and punishable under Section 1 (3) of the same Act.