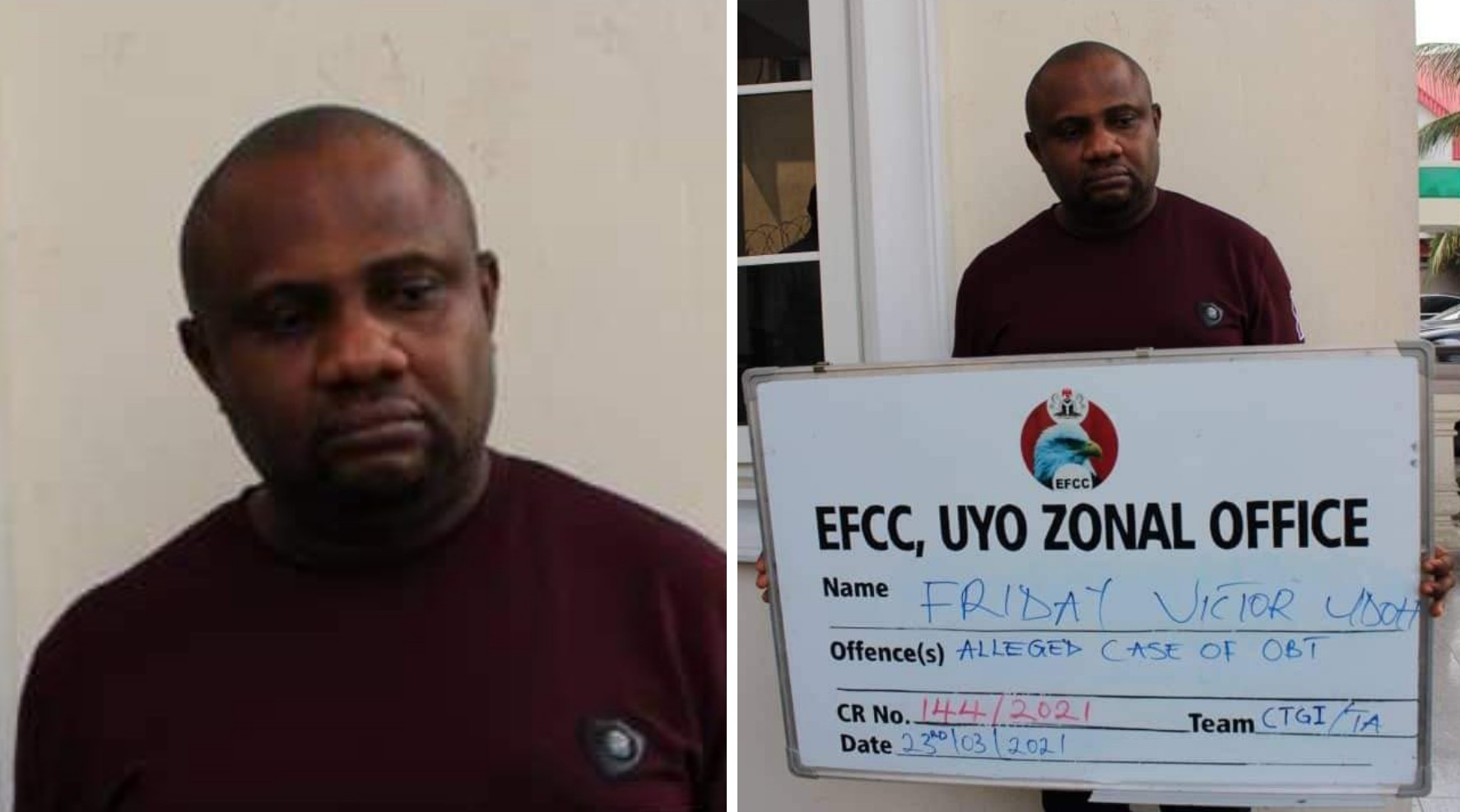 The Uyo Zonal Office of the Economic and Financial Crimes Commission, EFCC has arraigned one Victor Friday Udoh, an ex-bank manager before Justice Agatha Okeke of the Federal High Court sitting in Uyo, Akwa Ibom State over alleged fraud to the tune of N14m.

The defendant was arrested following petitions from Etim Joseph Eyo and Samuel Friday Ukut, alleging investment fraud perpetrated by the defendant at different times when he was manager of a commercial bank.

According to Ukut, in 2019, the defendant lured him into investing N13m for a fixed deposit investment with his bank, after convincing that he would be receiving 10.5% interest on monthly basis. Ukut said he received the said interest for four months only. All efforts made to contact the defendant proved abortive as Udoh severed communication with him for several months only to issue him two dud cheques of N13m for the capital and N6m for the interest.

Eyo on his own part, alleged that on March 23, 2020 he paid over a million naira into the defendant’s account to help deposit the Dollar equivalent into his domiciliary account for online academic purposes. Eyo said that the accused person confirmed the transfer to his own account, but refused to make a deposit of the Dollar equivalent into the complainant’s account.

One of the charges against the defendant reads; “That you Victor Friday Udoh ‘M’ on or about the 4th March 2019, in Uyo within the jurisdiction of this Honourable Court, with the intent to defraud, did obtain the sum of N7,000,000.00 (Seven million naira) from one Samuel Friday Ukut of Donhansco International under the pretence that it be used as “Unity Bank Fixed Term Deposit-Black Market” dated 4th March, 2019, the pretence you knew to be false and thereby committed an offence contrary to Section 1 (1) (a) of the Advance Fee Fraud and Other Fraud Related Offences Act, 2006 and punishable under Section 1 (3) of the same Act”.

He pleaded not guilty to the charges.

In view of his plea, Nwandu Ukoha, counsel to the EFCC prayed the Court for a trial date and remand the defendant in the custody of the Nigerian Correctional Service.

The defence counsel, Udofia Udofia who did not move any motion for bail, asked the Court to remand his client in the prosecution’s pending the hearing of his bail applications.

The matter was thereafter adjourned till April 19, 2021 for hearing of bail applications while the defendant was remanded in the custody of the Nigerian Correctional Service.