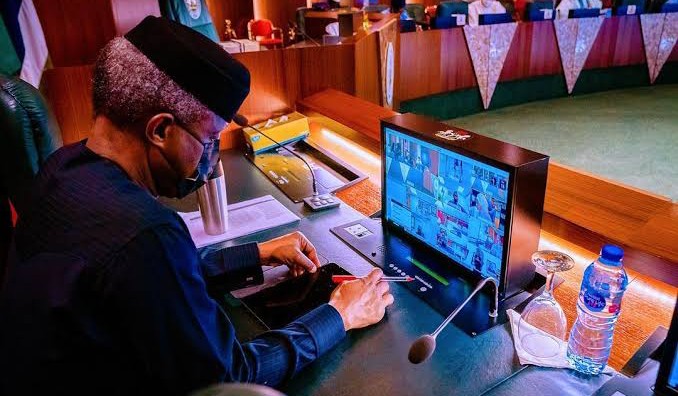 The Federal Executive (FEC) has approved the sum of N30.77 billion for various projects under the ministries of power, aviation, and transport.

Briefing correspondents after the meeting presided over by Vice President Yemi Osinbajo, at the presidential villa, Abuja on Wednesday, Minister of Power Mamman Sale, said the council approved two memos for his ministry.

“The other one is the approval of the contract for the design, manufacturing and supply of four fabricated sub-stations of 2×100 MBA 132 33 KV power transformers with complete accessories for deployment to Damaturu, Potiskum, Biu, and Maiduguri for the Transmission Company of Nigeria (TCN) in favour of Msssr Kidon T Good Electric Company Limited and Incomtel Engineering Limited in the sum of $24,387,850.22 cents plus N1,475,204,584.34. Altogether, it is N10,730,393,742.82.”

The Minister of Finance, Budget and National Planning, Zainab Ahmed, said the council approved the sum of N316.5 million for the second phase of Project Lighthouse, aimed at debt recovery.

She stated: “Project Lighthouse is a data engine that collects, integrates and analyses data from revenue-generating agencies in order to create insightful information for improved decision making.

“Messrs Carter House Consulting, a Nigerian technology company, who has worked with the ministry for three years, won the first phase of the contract in May 2019 and the second phase that is approved today is in the sum of N316.5 million.

“One major area that we have witnessed remarkable progress is in terms of recovery of debts owed to the government. Generally, revenue loopholes have been aided by poor information sharing enforcement.

“So, this Protect Lighthouse shows us that many companies and individuals who owe government agencies have refused to honour their obligations yet are still being engaged and transacted with, and even being paid on government payment platforms like Treasury Single Account.

“In 2019, the ministry issued a directive to all ministries, departments and agencies to aggregate and sent to the ministry a list of all debtors and their outstanding amounts that are owed to government agencies. This we have put together in one central fund that we call Project Lighthouse.

“Since that time we have been able to aggregate N5.2 trillion worth of debts that are being owed to the government by third parties, and as of today, we have been able to recover N49.7 billion of this amount through the efforts of works we’ve been carrying out through Project Lighthouse and we’re still compiling.

“Project Lighthouse has brought together data from the FIRS, the Nigerian Customs Service, the Corporate Affairs Commission, as well as data from BVN in one central pool. Also, we’re hoping we get data from three states; land registry data from the FCT, from Kaduna state, as well as from Lagos state and other states will also be joining in the second phase.

“So, what this has done is enabling us to identify revenues that government can collect and actually be able to use the common platform to collect some revenues. We’re leveraging this project to enhance our revenue collection capabilities.”

On his part, the Minister of Aviation, Hadi Sirika, said Council, approved the sum of N10,594,057,618.20 for the provision of Airport Management Solution for the international airports of Abuja, and that of Lagos and Kano, Port Harcourt and Enugu.

He said it is awarded the contract in favour of Messrs Arlington Securities Nigeria Limited, for the completion period in 12 months.

He explained: “This Airport Management Solution was earlier being provided only in Lagos and Abuja. This is now extended to all the five airports and what it will be doing; one is common to use terminal equipment, which is cute systems that are required for sharing airport resources in accordance with the requirement of IATA recommendation 1797.

“This allows flexible shared resources for check-in and boardings, such as servers, workstations, associated peripherals between all airlines and handling agents present at the airport.

“This will be for all the five airports and itself baggage drop. This service, as explained, will also be in all of the airports, which makes it faster and quicker for passenger processing.

“Another service to be provided is Local Departure Control Systems. This is aimed at airlines that are still using manual procedures like locals, charters, domestic, etc. The system secures and accelerates these operations while ensuring better service for passengers.

“The system also accepts mobile phone boarding pass or home-printed boarding pass, which we didn’t have before. Then, Baggage Reconciliation System also, where baggage can be tracked from when you arrive and drop your baggage, automatically it goes into the system and onto the aircraft itself.

“So, this will eliminate the issue of missing baggage or mix up of baggage to arrive at another location not intended.

“Then another thing is Electronic e-gates. These are access controlled gates to restrict only passengers and staff access to designated areas. The e-gates provide a platform to monitor and control access into the boarding area. This is new and not part of the systems that were being provided for Lagos and Abuja.”

The FCT Minister, Mohammed Bello said the council also approved two memos for the territory including for the contract for the provision of engineering infrastructure to a section of Asokoro District known as Abubakar Koko Street at the cost of N686,796,482.14.

The second contract approved is the contract for the construction of a 14.7 kilometre dedicated power line from the existing newly completed Kukwaba 132/33kv transmission station in Kukwaba District of Abuja at the sum of N1,398,901,681.27.