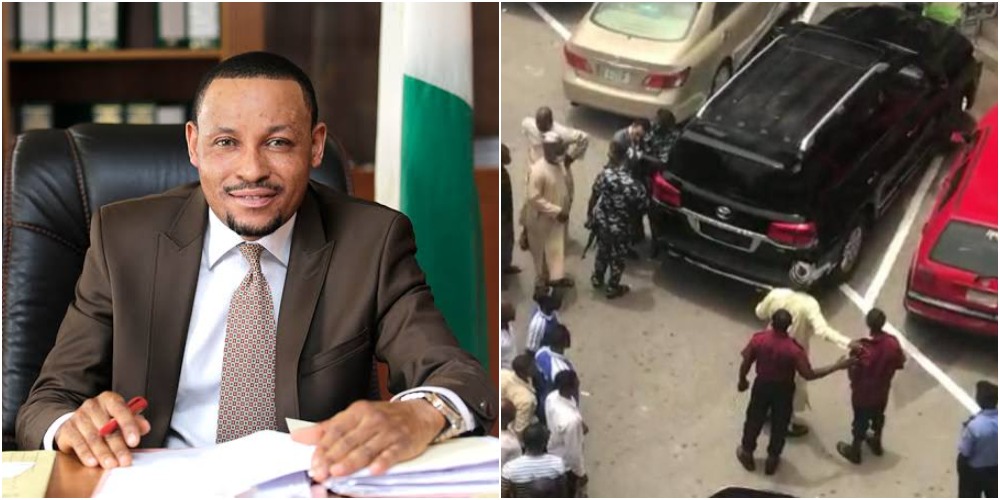 CCT Chairman: I was locked in a cage for 2 days, made to sleep in urine – Phone repairer narrates ordeal

Peter Onyuike, a phone repairer who was allegedly arrested on the instruction of the Code of Conduct Tribunal (CCT) Chairman, Danladi Umar, has narrated his ordeal in the hands of the DSS and police.

According to a report by Premium Times, Onyiuke revealed that he was detained in a cage for 2 days at the DSS custody, where he was made to sleep in his own urine.

When asked by newsmen if he would take legal actions against the CCT chairman or any other persons, Onyiuke answered in the negative.

Onyiuke told newsmen on Monday that his decision was hinged on the fact that he did not want to be at loggerheads with any influential person in the country.

While responding, he said he would not “want any more trouble from any big man in this country.”

“Whatever happened, I leave it to God who has seen me through all my troubles in the hands of that big man,” Onyiuke said.

Onyiuke, a phone repairer at one of the outlets at Banex Plaza, Wuse, Abuja, where Umar physically attacked Clement Sargwak, the plaza’s security guard, was detained without charge from March 29 till April 6 by the police at Wuse Zone 2, Abuja. See Also News Police Leave CCT Chairman, Umar, Arrest Trader For Assault 0 Comments 1 Week Ago

CCT Chairman, Umar to appear before Senate over alleged assault,…

Witnesses at the scene of the incident, in separate interviews with PREMIUM TIMES had said Onyuike was severely beaten by the security agents who reportedly acted on Umar’s order before he was driven away.

Umar, according to the witnesses’ account, accused Mr Onyuike of being rude in an encounter they had shortly after the CCT chairman assaulted the plaza’s security guard.

Onyuike had helped the CCT boss to pick up his phone that fell to the ground without him knowing, and was trying to return it to him when the Umar started an argument with him.

He was later picked up by security agents suspected to be the Department State Services (DSS) operatives who later handed him over to the police.

The police detained him from then till last Tuesday, clearly violating constitutional provision that prevents the detention of any person without charge for more than 48 hours.

When asked about his efforts to get justice, Onyiuke said on Monday that despite how he was beaten, with his clothes torn and the harsh treatment meted out to him in detention, he would not want to risk another ‘trouble’ from a Nigerian big man.

He said, “Sir, I do not want any more trouble from any big man in this country. With what I went through throughout last week in the detentions of the police and DSS, my brother, I was only saved by God. And I do not want to go back to it.

“I was beaten and my clothes were torn down to my underpants. When I was taken away to DSS custody, I was still beaten. They (SSS operatives) said I caused them body aches.

“I was put in a small cage; the same place I was urinating for more than two days before I was later taken to the police station.

“Whatever happened I leave it to God who has seen me through all my troubles in the hands of that big man, (Mr Umar).”

He added that he did not have a lawyer and his family members from whom he could have got support were not resident in Abuja.

“I don’t have a lawyer, my family are in the village and I am not sure any of them knew or was aware of my ordeals,” he said.

Speaking further about his experience, Onyiuke, added, “He said I insulted him, but I did not.

“All I did was to help him (Mr Umar) pick up his phone that fell to the ground and which I returned to him (Mr Umar). So I leave him to God.

“I don’t want him or anyone to come back for me or any of my friends here (plaza) who have been supportive and begin to intimidate us.”

Despite the accounts of several witnesses and the victim of the involvement of DSS operatives in the arrest and detention, the agency’s spokesperson, Peter Afunaya, had debunked it.

“Not true, no SSS (also known as DSS) operative did that,” he stated in a text message sent to our reporter.

Asked about Samuel Ihensekhien, the lawyer who broke the news of his detention to Sagwak, he said, “I don’t know any lawyer or anyone; it was just God that helped me all through.”

His position not to pursue justice contradicts that of Sagwark, the plaza’s security guard, who had Mr Ihensekhien file a petition against Umar at the National Human Rights Commission (NHRC), asking for a probe into the March 29 incident.

Mr Sagwak, in the April 9 petition signed by his lawyer, Mr Ihensekhien, accused the CCT chairman of abuse of power, assault, torture, and ‘xenophobia’.

When contacted over Onyiuke’s case on Monday, Mr Ihensekhien said, “I don’t have instructions for representation from Mr Onyuike.”

“I just had to assist out of my own benevolence to get him (Mr Onyuike) out of jail,” he said, adding that “But both Sargwak and the security company instructed me to represent them and that was why I filed a petition before the National Human Rights Commission.”

“So, if he (Mr Onyuike) approaches me, as my own practice I would represent him,” the lawyer also said.

Aside from the case filed at the NHRC on behalf of Mr Sargwark, a petition was also filed by two national officers of the Nigerian Bar Association (NBA), at the Legal Practitioners’ Disciplinary Committee (LPDC) seeking Umar’s trial for what they described as his “unlawyerly and ungentlemanly conduct”.

In the five minutes video footage that went viral, the tribunal chairman was seen slapping and kicking the 22-year-old, on March 29.

According to witnesses who spoke with our correspondent, the altercation was over the space where the CCT chairman parked his car on the premises of the mall.

Despite video evidence, the CCT chairman denied the assault allegation.