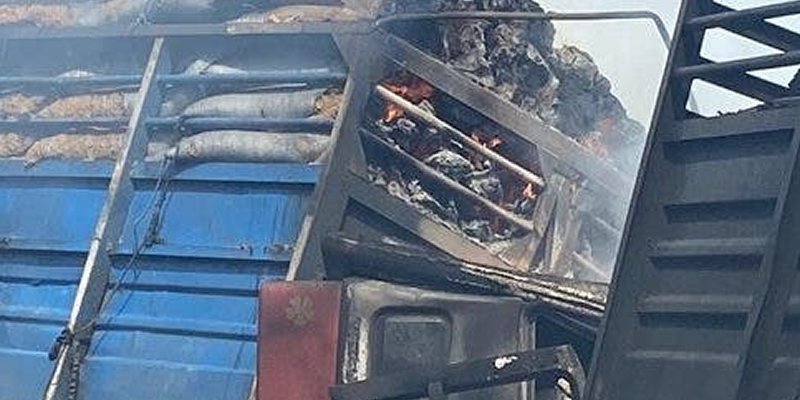 A man was burnt to death and beyond recognition in an accident involving four trailers and a petrol tanker in Kwara state.

It was gathered that the accident happened at about 9:00 am on Monday, April 26, at Bode Saadu-Jebba expressway, Moro local government area of the State.

The Public Relations Officer (PRO) of the state Fire Service, Hasan Adekunle who confirmed the incident said the accident was caused by over speeding by the drivers, resulting in a head-on collision.

The impact of the crash led to a fire outbreak and burnt the goods in the trailers.

Adekunle said “Today, April 26, 2021, at about 08:53hrs, Men of the Kwara State Fire Service were summoned to a road accident by one FRSC officer called Azeez Olaolu. The accident occurred along the Bode-Saadu-Jebba expressway this morning.

“The accident was a head-on collision that resulted in the fire outbreak which involved five heavy vehicles; four trailers filled with different variety of goods, and a petrol tanker.

“In this terrible accident, a man was burnt to death and all the vehicles involved too were affected by the burning fire, although at different degrees.

“However, our firemen were able to minimize the damage by quickly putting out the ravaging fire on time.

“The report says, the accident was caused due to the over speed by the trailers’ drivers.

“In this regard, The Director of Kwara State Fire Service, Prince Falade John Olumuyiwa (CFO) therefore urged transporters to be extra careful whenever they were holding a steering.”