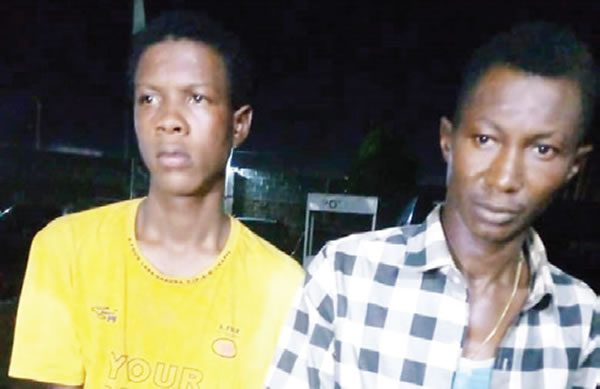 Police arrest suspected robbers on way to operation in Ogun

The Ogun State Police Command has arrested two suspected armed robbers in Atan-Ota, in the Ado-Odo/Ota Local Government Area of the state.

The state Police Public Relations Officer, Abimbola Oyeyemi, who disclosed this in a statement on Thursday said the suspects, Rasheed Ayinde, 20, and Matthew Oladipupo, 33, were arrested on Tuesday around 9.30pm were arrested when the Divisional Police Officer at the Onipanu division, Bamidele Job, was on a routine patrol with his men and sighted the duo on a motorcycle.

Oyeyemi said, “On sighting the policemen, the suspects made an attempt to make a U-turn, but were stopped by the team, who suspected their movement.

“A search was there and then conducted on them and one locally-made pistol and one live cartridge, as well as assorted charms, were recovered from them.

“On interrogation, they confessed to being on their way to carry out a robbery.

“The duo claimed to be living in Abeokuta, but used to operate in the Onipanu and Atan-Ota areas.”

Niger: 16-year-old boy arrested for attempting to exhume body from…

The police PRO said the state Commissioner of Police, Edward Ajogun, had ordered the transfer of the suspects to the State Criminal Investigation and Intelligence Department for discreet investigation.