It was gathered that the crash involved a commercial motorcycle also known as okada and a faulty truck.

An eyewitness said the deceased were the commercial motorcyclist and his passenger. He narrated that the motorcyclist rammed into the truck which was parked beside the road, when it was raining.

“It was raining when the accident happened. The okada man and his passenger rammed into the truck parked beside the road.

“The truck was faulty and it was parked at the fast lane of the road. Since it was raining, I think the okada man did not see the faulty truck and rammed into it. The okada man died instantly and the passenger gave up the ghost shortly after,” he said.

Expressing their grievance on the matter, some youths in the area set the truck ablaze, in protest.

The government officials and security operatives were said to have quickly moved to the scene to prevent the protest from degenerating.

The Senior Special Assistant to Governor Rotimi Akeredolu on Security Matters, Alhaji Jimoh Dojumo, said those who burnt the truck would be exposed.

The Police Public Relations Officer, Mr Tee-Leo Ikoro, who confirmed the incident said investigation into the matter had begun. 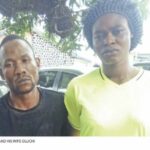