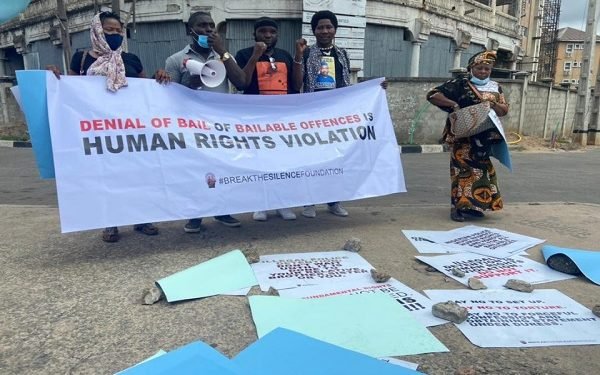 Nollywood Actor, Yomi Fabiyi and others have stormed the police command in Panti, Lagos to protest against the detention of Olanrewaju Omiyinka, popularly called Baba Ijesha, who was accused of molesting a 14-year-old girl.

Fabiyi, who is accompanied by other protesters marched from Casino bus stop to Panti Police Station on Wednesday, described the continuous detention of Baba Ijesha as “illegal”.

The protesters are demanding that Baba Ijesha should be released from detention pending when a court would hear his case.

The protesters were seen carrying placards and banners with different inscriptions such as ‘denial of bail of bail of bailable offence is human rights violation’, ‘Nigeria police, please allow the law to dictate to you, not Iyabo Ojo, Princess and co’, ‘release Baba Ijesha’, and ‘Nigeria police must respect human rights and honour bail for bailable offence’.

WITHIN NIGERIA recalls that the Nollywood actor has threatened to mobilise protest over what he called illegal detention of his colleague.

Fabiyi gave the police before Wednesday, May 12th, 2021 to release Baba Ijesha following which he will mobilise Nigerians for a protest.