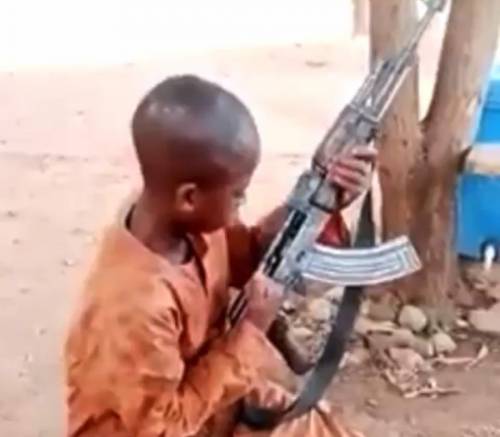 A teenage has narrated how he was taught how to shoot and kill by one Alhaji in Gidan Kaso village in the Birnin Magaji area of Zamfara State.

In a now viral video, the young boy said members of the gang of bandits he belonged to had kidnapped so many women too.

According to him, some of those abducted were killed, raped or tied up.

The teenager claimed he had used his rifle uncountable times.

His confession is coming few months after the Zamfara state governor, Bello Matawalle revealed that teen bandits were terrorising the state.

According to SaharaReporters, Deadly attacks have raged across Zamfara state where bandits have thrived.

Farming and herding communities in the state have long been terrorised by gangs who raid villages, steal cattle and kidnap residents for ransom.

In 2019, the state government entered a peace agreement with the gunmen.

About 15 brand new Hilux vehicles and cash gifts were also given to leaders of different ‘repentant’ gangs of bandits by the governor in 2020.

But despite all these, communities in the state are still being attacked and residents kidnapped and/or killed.