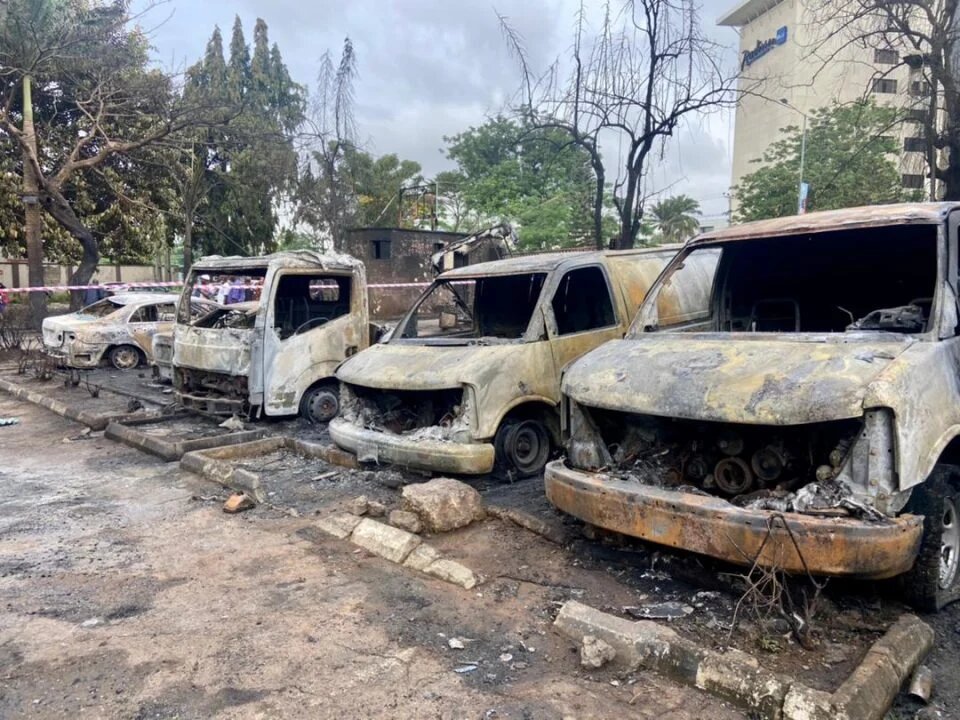 A gas explosion that occurred in Ikeja part of Lagos has reportedly claimed five lives, while nine, including a Filipino, sustained injuries.

It was gathered that the tanker, conveying liquefied petroleum gas on the ever-busy Mobolaji Bank Anthony Way around 10pm on Thursday, spilled its flammable content into nearby OPIC Shopping Plaza, beside Sheraton Lagos Hotel.

Two businesses situated in the plaza, New China Restaurant and Oasis Supermarket, suffered extensive property damage with about 22 burnt vehicles sighted in the parking lot of the plaza.

Eyewitnesses told PUNCH that most of the casualties were workers at the Chinese restaurant. The restaurant was said to occupy the rear of the four-storey building, downhill from the gate.

The acting Coordinator of the Lagos Territorial Office, National Emergency Management Agency, Mr Ibrahim Farinloye, who spoke at the scene of the explosion, stated that NEMA got an alert and resolved the crisis by 3.50am.

“Because of the elevated position of the tanker, all of the content leaked out. All LPG tankers are imported. They are not fabricated in Nigeria, so this incident was not expected. There are five dead victims and 11 rescued alive. Two of them died in the hospital; three were recovered here. They sustained burns.”

He added that the tanker driver and motor boy ran away, saying the incident would have been better managed if the highway was cleared.

“Vehicles were moving and with the vehicular movement, people ought to have parked away when they saw the gas explosion, but they continued moving,” Farinloye said.

A slicer at the affected restaurant identified only as Godwin told one of our correspondents that he was off-duty when the incident occurred, adding that he lived behind the restaurant.

He said, “Around 11, I heard the double explosions from my apartment. The whole building was shaking. I had to hurriedly take my wife and two kids and run away from the explosion. The leaked liquid gas had spread from the tanker into the kitchen and when it was ignited, it caused the explosion of the gas used by the kitchen.’’

Godwin noted that a pregnant woman, during the rush to escape the fire in the plaza, fell and was trampled on by others. “Luckily, she did not lose her pregnancy but sustained bodily injuries,” he added.

According to him, the manager died while trying to escape the gas explosion with a Filipino worker and a driver.

He said, “When the manager, the Filipino worker and the driver tried driving away to safety, the gas from the restaurant used for cooking also got ignited and exploded. The explosion was so strong, it pushed the vehicle they were riding in away and the manager and driver died. However, he said the Filipino worker might survive.”