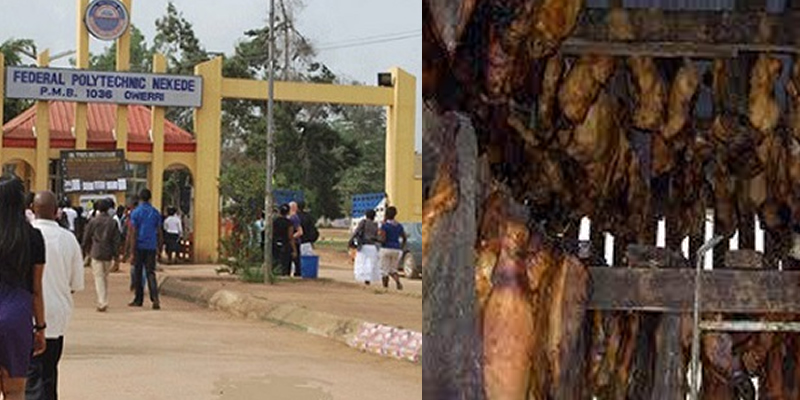 Security operatives of the Federal Polytechnic Nekede in Owerri, Imo state have arrested some suspected “poisonous” dry meat sellers from Aba in Abia state from gaining access into the institution.

It was gathered that the incident happened last Tuesday, June 22nd at the entrance gate of the Federal Polytechnic Nekede.

The suspects were reportedly arrested after they had bluntly refused to taste the meat packaged to sell to students, as it was ordered by the institution’s security operatives.

The suspects were later handed over to the law enforcement agency.

According to a document from the office of the registrar, Okoronkwo A. E, stated that: “Some unscrupulous person were caught in the institution Tuesday 22nd, June 2021 with the intention of selling unwholesome dry meat to the unsuspecting Polytechnic community and most importantly to our esteemed students.

“The report had it that they were intercepted by the institution security personnel and on interrogation, they confessed to have come a certain streets in Aba.”

He continued: “When the security officers told them to taste the purported dry meat, grey refused which raised the suspicion that the meat was not wholesome and therefore could be the dangerous to human’s health no one knows there intentions in the regard.”

However, the management “Has warned students to beware of what they consume and the sources forthwith.”