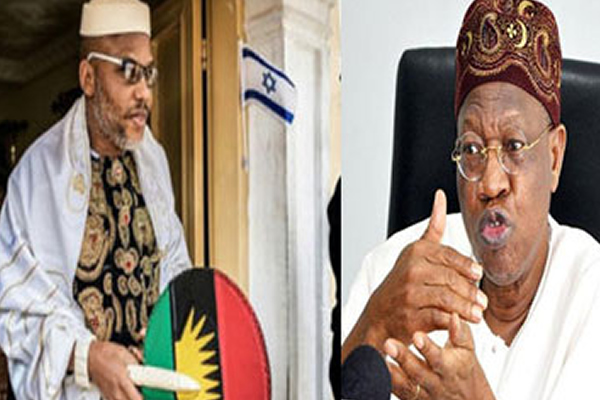 Federal Government has revealed the kind of treatment that the Supreme Leader of the Indigenous People of Biafra, IPOB, Mazi Nnamdi Kanu, will receive while in detention.

Minister of Information and Culture, Al said the IPOB leader will receive a fair deal of what he denied victims of the violence he allegedly caused in the South-East.

Mohammed stated this while responding to those calling for a fair trial for Kanu at a press conference in Abuja on Thursday.

“It is interesting that many are suddenly calling for a fair trial for Kanu as if he didn’t get one before he decided to jump bail and flee.

“However, I can assure you that the fair deal that Kanu denied many of the victims of the violence which he willfully instigated through his broadcasts and tweets will not be denied him.

“Finally, there have been speculations on how this re-arrest was pulled off and in which country the hitherto fugitive leader of the proscribed IPOB was nabbed.

“What we can tell you, once again, is that the re-arrest was made possible by the diligent efforts of our security and intelligence agencies, in collaboration with countries with which we have obligations. We continue to respect and honour the obligations,” he said.